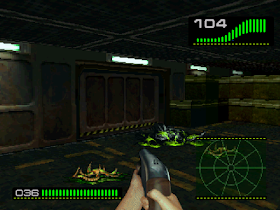 Genre: Action, FPS
Perspective: 1st-person
Gameplay: Shooter
Setting: Sci-Fi / Futuristic
Published by: Acclaim Entertainment
Developed by: Probe Entertainment
Released: 1996
Platforms: PlayStation (PSX, PS1), DOS
The game is set up almost everywhere indoors and in narrow aisles, just like in the Alien series. There are a few open places, but only large rooms like depots, you do not see open air rooms like in Doom. Despite this, the graphics of the game are very good and the fact that the game is set in corridors makes it more frightening. There are enemies everywhere, more and more, which are becoming more difficult with the passing of the game. There are also many secret rooms, which are difficult to locate, but provide weapons and ammunition in large numbers.
Another game about Aliens for PS1 - Alien Resurrection.

Cheat Mode: 1G0TP1NK8C1DB00TS0N
Final Level: Q3BQVBDXRCPB94BNQVBTLBLMBGWH9GBL
Level Select: GOLVL + the number of the desired level (for instance, for level it it's GOLVL 8)

At the behest of Lt. Ellen Ripley, the player is inserted into the story of the Alien franchise, finally concluded with Alien 3. But along with scenes in CGI animation, the story is told through texts with instructions that guide the player through a story oriented , different from the specific history of the films.
The game is divided into 3 major episodes: