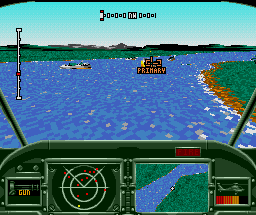 Genre: Action, Simulation
Perspective: 1st-person
Gameplay: Vehicular Combat Simulator
Vehicular: Helicopter
Published by: JVC Musical Industries
Developed by: Core Design Ltd.
Released: 1993
Platform: SEGA CD / Mega-CD
Simulator of military operations on helicopter AH-73M. In the game Thunderhawk about ten levels, each of which is collected for 4-5 tasks, plus additional, which do not necessarily have to be done, they are needed only to raise the number of points. You are in the "MERLIN" command. You will visit all over the world, the desert, Alaska, the ocean, etc. You have three types of weapons, in some missions it will be changed to a specific one, for the performance of a task. In 1991, a similar game came out Thunderhawk AH-73M for Amiga, Atari ST, DOS.In Europe, the sales of this game were about 300,000. For Sega CD, it was quite a lot.
‹
›
Home
View web version