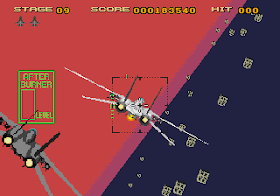 Genre: Action
Perspective: 1st-person, Behind view
Gameplay: Arcade, Shooter
Vehicular: Flight / Aviation
Published by: SEGA of America
Developed by: SEGA Enterprises Ltd.
Released: 1992
Platform: SEGA CD / Mega-CD
Away all the brakes of G-LOC: Air Battle, long live crazy shooting! The developers quickly realized that it was not interesting to carry out the mission, and in 1991 they released something curious. Before the game begins, we learn that the enemy deploys military objects - they must be destroyed, and at the same time, and all those who fall into sight. The gameplay was revised in the direction of After Burner, i.e. in the direction of continuous fun shooting without any obligation. All the hardware achievements of recent years have remained in place, so that the game won in all positions. All interested owners could remake their G-LOC: Air Battle machines in Strike Fighter, it was not difficult. It is a pity that such a wonderful game came out only in Japan. And it's even more offensive that in the home version we only have After Burner III for Sega Mega CDs and FM Towns, not the most famous platforms for us.
After Burner III, despite the greatly simplified in the visual plan and pale levels, it looks almost dignified. Iron prefix at that time already in places used, including hardware resizing and rotation. Quick gameplay, obedient control, quality music, sounds of shots, voices, everything is normal. There are even pseudo-animated cutscenes at the beginning of the game. In general, it's strange, but our F-14 Tomcat, as before for Mega Drive, is firing continuously, the player only releases missiles, which are simply nemeros on board.
In the main menu, you can choose between the traditional view (from the cockpit) and the view in the style of After Burner II. In addition to the standard arcade type of game in the menu, you can select flights for time and for accuracy. Music is different from the one that plays in Strike Fighter, besides, there are recycled melodies from After Burner II.
Critics say the game is quite restrained, which is generally justified. Serednyachok. Between the waves of enemy objects there are visible gaps, and they themselves are usually far away, not more than points, so that, in a compartment with quiet, sometimes tedious music, all the energy can not be felt. In addition, there are no exciting air fights, it all boils down to the principle of "aimed and pressed".
‹
›
Home
View web version