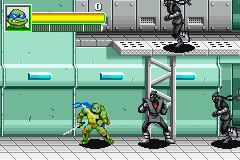 Genre: Action
Perspective: Side view
Visual: 2D scrolling
Gameplay: Beat 'em up / Brawler, Fighting, Martial Arts
Published by: Ubisoft
Developed by: Ubisoft Divertissements Inc.
Released: 2007
Platform: Game Boy Advance (GBA)
Teenage Mutant Ninja Turtles is a game for the Game Boy Advance from 2003. The game is based on the second animated series of Teenage Mutant Ninja Turtles, making it the first game based on this series.
Instead of a fixed number of levels played with each Turtle, this game for each Turtle includes a unique scenario with own levels. As an addition to classic side-scrolling levels, there are also third-person races, a shell-glider level for Donatello and a motorcycle race between Raphael and Casey Jones.

This part of the game begins with a background story about what has happened during the new TMNT series. After seeing a news report about the mouser robots, the Mousers attack the house of the Turtles.
Leonardo's special level takes place in the Turtle Van (TMNT van). The player must blow up mice and reach the end of the level. For this purpose, final and steel doors must be inflated.

Raphael is the next playable Turtle. He gets a quarrel with Michelangelo and goes outside to cool down. There he faces purple dragon members and later Casey Jones. He has to defeat the leader of the Dragons, Dragonface.
In his special level Raphael races against Casey on his motorcycle.

Dr. Baxter Stockman makes new, unbeatable Foot tech ninjas. Raphael is lured and caught in an ambush. Donatello has to save him, and tries to discover more about the fascinating technology behind the Foot Tech ninjas.
Donatello's special level is a hangglider level. He must defeat enemies at a barrier and safely reach the end of the level.

Michelangelo's level begins with the Turtles who find a strange substance. This substance appears to be attributable to genetically engineered creatures. On the way, Michelangelo must defeat mutants and other enemies.
Michelangelo's special level is a skateboard level in which he has to collect some purple crystals as he evades in the sewers pipes.
‹
›
Home
View web version