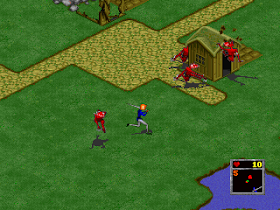 Genre: Action, Strategy / Tactics
Perspective: Bird's-eye view
Visual: Isometric
Setting: Fantasy
Published by: Crystal Dynamics
Developed by: Toys for Bob Inc.
Released: 1994
Platforms: 3DO Interactive Multiplayer, SEGA Saturn, DOS
Once in the beautiful medieval kingdom Franzpowanki, a young shepherd, and in combination a runaway boy, named Chauncey, saved his king from a horrible and ridiculous doom. The king choked, and his retinue did not even notice it was carried away by the jokes of the Lord Chancellor. Naturally, even such a noble act as the salvation of the ruler could not, without causing consequences and consequences arose here, namely immediately after the salvation of His Highness, Chauncey was knighted and received from the hands of the saved huge sword Grimthwacker, as well as a small land lot . And everything would be fine if just at this time on all the territory of the kingdom did not raid a terrible horde of creepy creatures called hordlings (hordlings), from which the newly-made knight must save the kingdom. And then there is not enough that the boy does not have enough experience, and even the same Chancellor named Kronus Maelor looks as if he is seriously looking askance, and obviously is plotting something.
What I did not like wildly, on 3DO Interactive Multiplayer, duck is the total absence of any attractive real-time strategies (if at all they had place to be). I do not know how this can be explained, but even trite Dune II or some of its clones, and that was not. The more valuable of them was the game The Horde, first because it was not someone's clone, and secondly because it was the quintessential tactical genre and action in real time. Simply put, at the very beginning of the game you were given a small village and, so to speak, before an active action, this village had to be rebuilt for a certain (suitable for the defense of houses, inhabitants, crops and livestock) manners. Arrange traps, dig an irrigation system, create artificial ponds, build fences, etc., etc. All this took place in a special mode, with limited time (as far as I can remember, there was quite a lot of time left), but then it just started battle, that is, the enemies literally attacked your village from all sides and here you could check the success of your fortifications.
However, in one observation of how the enemies burn the native huts, the meaning of the game is not, but it is precisely in the destruction of these very enemies. That is, you as a hero run around the village and try to kill all the monsters (so that they do not nail you), before they devour the crop, the cattle or worse, the peaceful population. Just because cows and crops bring you money for the next season, and civilians you must protect by order of the king. After completion of this active phase, you calculate your money losses (destroyed houses, eaten crops) and profits. This very profit will allow you to better strengthen the village, plant more trees, and maybe buy another cow. True, the village increases regardless of the profit you have received (often even in an undesirable direction, breaking the defensive structure), as well as the number of monsters attacking it. From time to time, you also receive messages through the crystal ball from the king (positive) and from the chancellor (negative), and the chancellor takes away your profit by setting a very high tax. That is, it is very difficult to live. However, for all the same accumulated money you are able to buy all sorts of magical artifacts, devices, technology, hire mercenaries and even help the dragon.
Unlike the dragon, which is not visible (he takes on the role of artillery in the game), his enemies, these ordlings you can see very well and I must say that they are just wonderful. The game generally has a wonderful animation and great humor. And the enemies are diverse to horror. Often their diversity is associated with the natural conditions of the locality on which you are located. That is, green lawns are only for pervosti, because the fate will cast you further in the swampy terrain, into the snowy expanses, and even into the Kar-Nyar desert. Everywhere you will build, protect, save and destroy. Different methods, in different ways. And yet this is a rare case when playing with the codes is even more interesting than just. Then the level of fun in general is just off scale. Yes, and I must say that without the codes to pass the game is not as easy as it may seem. We can say that it is almost impossible.
It would seem much better and so very wonderful game turned out, but even more remarkable it was due to the excellent FMV. Here and the actors (even better than in the other Phoenix 3) I play perfectly, and in general at once some such medieval coloring is created. And it's so funny. There, for example, even news bulletins come out, which report on your achievements and other political, as well as military situation in the kingdom. Maybe due to all this, The Horde like Return Fire, already with 3DO continued its march on Sega Saturn and even was published in the version for MS-DOS. However, she did not become popular.

When placing cows, keep in mind that they need areas for grazing. Leave at least two empty Parcels between each neighboring cows. Otherwise they will trample the grass and by the end of the season they will bring no income.
When placing riders and bombs, consider that the voracious hordling moves directly to what can be eaten. Remember that the knight's sword is more effective than yours.
Your property in one of the territories can not be used for another. Therefore, before withdrawing from the scene, pay your cows, trees, barriers, riders - everything that you have, in | money.
Be careful, reflecting the invasion of chord ling. They can cause serious damage to your health. However, never give up before the hordes of hordling. The peasants count on you. Destroy the hordling if they destroy houses and devour their inhabitants.
If it's time to pay taxes, and you do not have the money, the Chancellor will put you in a dungeon, and the game for you will end in ingloriousness. Note that the killed hordling sometimes throw coins that you can collect.
Anything that looks like a red fungus, mold or [rot, can damage your crop. Have! also in mind that the chordlings can get to you: the underground passages and appear from the holes of the ground squirrels.
Take care of riders and archers. To return the rider, you have to pay thirty crowns, and for the archer - sixty crowns.
Exterminate the hordling, combining the action of the flute and the Morningstar. The sounds of the flute will entice the hord lings into the pernicious Morning Star. Hordling can also be lured! into the water and drown if you play the flute while standing in the water. And note, however, that the Juggern-e naut hordigings do not sink.
After hearing Shaman screams of the hordling, [keep in mind that the ability of the chords to reproduce their kind is related to it.

This is the first village that you, with the 25th crown in your pocket, have to protect from the chords. To multiply your means, spend about twenty kronor to plant seedlings. The tree manages! in the crown, and brings - five. The greatest harvest you will collect in the event that it will be planted in two: a tree in each piece of land. As soon as money: allow, buy a cow. Cows and seedlings are located to the south of your settlement - the chordling mainly goes from the north.
It is good to have at least ten cows. Do not forget to sell trees and cows before moving to the Wood Kingdom.

Damaging the tree. You are worsening your situation. And if you manage to bring 25 new trees to the forest, the wood spirit of Jaia (Jaia) will give you Boots of Boogie worth three hundred crowns.

Marsh chords are strong in muddy water and helpless on land. Place your riders and archers on solid ground. Watch out for the frogs that roll along the screen. If they jump into the water, you have a chance to earn on it up to five hundred kronor. Later, approximately in the third year, you will be able to find in the Buzal Tops flute for the bait of the chords, saving yourself five hundred crowns. Dig for this at the intersection of two straight lines-the extensions made from the arrow keys.

By placing horsemen and archers here, note that skinny chords that inhabit the desert are able to make their way in the sands. Do not place your people on sandy terrain.
Later, you will discover some strange objects - green meat, purple nuts (grains) and blue fruits. You will also see a green vineyard and a bamboo shoot. Pour a ditch to the vineyard. Take care of your moats.
Wilmbli will ask you for a meal. Give him three objects of strange colors - and, having returned, he will bring the weapon you need - a super-powerful "Trident".

Do not use your traditional weapons (Bombs, Rosco, Super Scorcher) against snow chords - it can not cause them harm. From the snowballs that they throw at you, fight with the sword. But if the chordlings will roll on you oolshie clods of snow - better to avoid.
To save fertile land and clean up new plots, destroy the snow with bombs. Take the cows out on the snow to fertilize the soil. Fill in summer I new land with meltwater.

Perform this trick during normal play before entering the Weapon Shoppe, because in the store the game can not be paused. Enter the code to receive 30,000 kroons and you can make a purchase, then click
B, Right, A, Left, Left, Down, Right, A, A, Left.