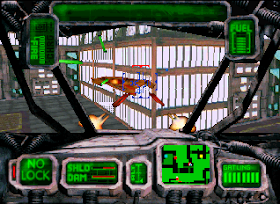 Genre: Action
Perspective: 1st-person
Gameplay: Shooter
Vehicular: Flight / Aviation
Setting: Sci-Fi / Futuristic
Published by: Songbird Productions
Developed by: Rebellion Developments Ltd.
Released: 2000
Platform: Atari Jaguar
A good 3D shooter Skyhammer from Rebellion creators Alien vs. Predator. It was originally planned to call the game HammerHead, and exit it was on CD, but plans changed later, it was renamed Skyhammer, and she came out of the cartridge for Atari Jaguar. The game is reminiscent of G-Police for PlayStation. In the early 21st century, cyberspace was declared the legal equivalent of Hardspays. In 2012, hackers introduce a terrible virus into the network of computers. Soon, citizens had to choose between the slavery of the corporate contract or be outlawed. You will visit three different cities. Each city is divided into 15 parts, each of them has three corporations struggling for the territory. You will be a pilot of Skyhammer related to the corporation Cytox. That the game is well-that we have complete freedom of action, such freedom in the game Grand Theft Auto (GTA). We are free to carry out the mission, as we deem it necessary. At the same time, we will earn money to improve our ship and purchase weapons. The game has two modes of the game Mission Mode and Battle Mode.
‹
›
Home
View web version