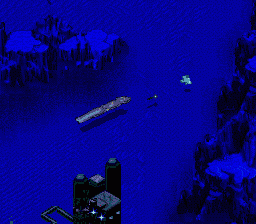 Genre: Action
Visual: Isometric
Gameplay: Platform
Setting: Sci-Fi / Futuristic
Vehicular: Naval / Watercraft
Published by: Black Pearl Software
Developed by: Sculptured Software
Released: 1994
Platform: SEGA Genesis / Mega Drive
The game, created under the license of the eponymous series, produced by Steven Spielberg. The middle of the 21st century, humanity completely colonized the ocean and brought crime, terrorism and wars with it. You control the seaQuest DSV 4600 submarine in the service of the United Oceans of the Earth and carry out various tasks - saving scientists, fighting terrorists and pirates, searching for artifacts. Gameplay and control are similar to Strike games - the same isometric perspective, similar control principles, info screens and different types of weapons. In addition to weapons, the boat can also be equipped with robots, mini-submarines and a trained dolphin. A feature of gameplay is the ability to earn money for performing tasks and destroying opponents (or to receive fines for damaging allies or killing various non-aggressive marine animals), for example, you can purchase the necessary equipment before the mission. In addition to interesting gameplay, the game has a very beautiful graphics.