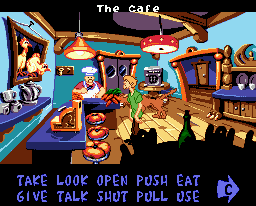 Genre: Adventure
Perspective: 3rd-person
Gameplay: Graphic Adventure, Puzzle elements
Interface: Point and Select
Narrative: Detective / Mystery
Published by: Acclaim Entertainment, Sun Corporation of America
Developed by: Illusions Gaming Company
Released: 1995
Platforms: SEGA Genesis / Mega Drive, Super Nintendo (SNES)
This game, I probably would have attributed the text quest to the genre. In it, you will break your head, not less than in Shadowrun, Cosmic Spacehead, Soleil, Light Crusader or The Story of Thor. In Scooby-Doo, all reasonable actions with objects and people are determined by teams. When you press the "B" button, the cursor appears on the screen (this is already when the prefix is turned on and starts the game). If you point it at an object with which you can do something, an inscription with its name appears at the top. With the "C" button you call "inventory" or pockets of Shaggy (the main character). And by pressing "A" you can, if necessary, cancel the selected command. Teams (there are only ten of them):
TAKE - here, unlike the "Cosmic", do not pick up, but just take it.
LOOK - look. In principle, this team is not particularly necessary to you, but if you want to know the opinion of the protagonist - Shaggy about any subject or person, then - please.
OPEN - open. Well, to open, as you understand, you can door, locker, etc.
PUSH - push, move.
EAT - to eat. "Feed" Sheggi you can only two times per game, and even once it will be an antacid with an expired shelf life.
GIVE - give an object to a living creature (a person, a bear).
TALK - talk or "push" speech - as Eler Cant, who described Cosmic, put it. You can accomplish this command with almost any person.
SHUT - close. This is the exact opposite of the OPEN team.
PULL - push it away, pull it out.
USE - apply. The most important team in the game. Sometimes it is applied between two things in the inventory.
So, we start the game. In the initial options, you see three labels:
Play Blake's Hotel.
Play Ha Ha Carnival.
Sound test.
Yes! Here are two adventures! And we will begin the first part.