Rise of the Dragon (SEGA-CD) 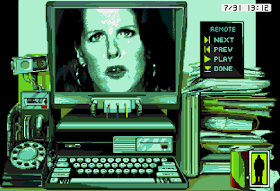 Genre: Adventure
Perspective: 1st-person
Gameplay: Graphic Adventure
Setting: Cyberpunk / Dark Sci-Fi
Narrative: Detective / Mystery
Published by: SEGA Enterprises Ltd.
Developed by: Dynamix
Released: 1992
Platform: SEGA CD / Mega-CD
Game Rise of the Dragon - a wonderful quest for Sega Mega-CD, received a mark of MA-17 for scenes of violence, profanity (mats), links to fictional illegal drugs, prostitution and naked girls. The Sega CD version differs from the others in the game's voice acting and some scenes. The game takes place in the cyberpunk of the universe in Los Angeles in 2053. When creating the game, the authors were inspired by the movie "Blade Runner". The protagonist of the game William 'Blade' Hunter former officer of the police department of Los Angeles became a private detective. When the disobedient daughter of Mayor Chandra was found dead and terribly mutilated because of experiments with new designer drugs. You are hired to find the guilty. You find an underground Chinese mafia, led by a drug lord, claiming world domination.During the game, you have to build a relationship with her friend Karin, to uncover the mystery of Chandra's death and the MZT drug. And to stop the villains. The game is time-bound. At certain moments of the game you will need to be in the right place at the right time. At the end of the game, Deng Hwang will use the MZT drug to turn into a monstrous dragon.In Japan, this game was released under the name of Rise of the Dragon: A Blade Hunter Mystery.
‹
›
Home
View web version