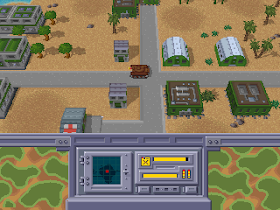 Genre: Action
Perspective: 3rd-person, Top-down
Pacing: Real-Time
Gameplay: Shooter
Published by: Prolific Publishing
Developed by: Silent Software
Released: 1995
Platforms: 3DO Interactive Multiplayer, PlayStation (PSX, PS1)
With the advent of computers, and then game consoles, so literally every first game in one way or another was associated with the war. Even on NES, it's not so easy to recall a game without war or brutality (as a manifestation), and what about 3DO Interactive Multiplayer? Wars there were more than enough, and Panzer General, Cannon Fodder, and at least Wolfenstein 3D - are the bright proof. And already such game as Return Fire is simply classics of a genre. It was with 3DO that she continued, though not victorious, but marched to other prefixes and platforms, without taking captives and surrendering to the enemy.
The rest of the special impression was not made, but because we will talk specifically about this. Moreover, there is something to talk about. Well to start the Return Fire (as well as Cannon Fodder) was not a strategy. It's quite an arcade. At your disposal were four types of transport: three tanks, three rocket launchers, three helicopters and eight jeeps. Probably was curious to find out why so many jeeps? The point is that the goal was to find on the map a special house in which was an enemy flag. It was the jeep that needed to be brought to its base (more precisely, into the underground bunker). Accordingly, so that your jeep before the time is not nailed, other types of equipment and it was required to clear the road to the cherished goal.
Special houses with flags, there could be several on the map, but the flag itself is naturally only one. Only towers protected it, because the enemy had nothing more. True, there were still helicopters, but they appeared only when the player began to stand idle for a while in one place, that is, these same helicopters were warmed up by the player all the time, not allowing to relax. The enemy also had a huge submarine. Ask for what it is needed for? The fact is that all companies were conducted on small islands and naturally, the inquisitive mind of the player was always trying to find out what it is beyond the sea by the ocean, and there was just this wonderful submarine which destroyed either your helicopter or a jeep as the genie was quite an amphibian). From the graphical point of view, all this was happening in the desert (naturally not taking into account the situation with the submarine), and very monotonous, but it was very fun playing there. Firstly, it was just interesting to frenziedly shoot at all in a row, because everything just could be destroyed. All the walls and buildings, up to the foundation and even more. At the same time, small figures of people ran from some buildings. Figures screamed and threw you grenades, and when you press these people on your tank, there was a wonderful chomping sound. Thus, over people it was fun to mock together with a friend, that is, together.
You could play really together and at the same time the screen was split into two halves. So to admit it was even more interesting, because firstly how much fun in mutual shooting, and secondly it was simply funny for example to drive a jeep with its own flag, from an enemy helicopter, to the remarkable "Flight of the Bumblebee" by Rimsky-Korsakov. Music there generally deserved a separate evaluation, because it was not just classical, but also of excellent quality, in a magnificent performance. It and without any game could be listened to for hours, and already during the fire, against the background of crumbling buildings, another march was simply unforgettable. And the music was played on the occasion, and when there was no reason, it usually calmed down and it was possible to simply listen to the sound of caterpillars or the horns of the bell of refueling (there were two types of buildings and fuel and ammunition could be replenished there).
Well, just for the little things. How often did you see a Russian-language game on 3DO? And Return Fire, just supported ten languages, among which were not only the official languages ​​of the United Nations, but also for some reason such as Portuguese and Korean. The truth in any case is just a plus. Another advantage was a nice 3D graphics. And cars and some objects on the map, everything was in 3D and it looked like it was not strange, very wonderful. The only minuses among all this idyll, you can consider some monotony, as well as the fact that the game itself was very short, and its passage simply did not make sense, because each level was just a set of cards. And there were several levels. When you passed them all, nothing like this happened. That is, the only award you were again levels, but already open (they were given graphic codes). Truth probably it is also enough, because we are not playing for the sake of passing, but for the sake of the process itself, and more accurately extracting joy and excitement from it. There is enough of this in the Return Fire.

A - grenades;
В - inflation of wheels for movement on water;
C - transportation of the flag.

Control in the bunker

D-pad - the choice of technical means;
В - viewing the map;
C - view inventory and ammunition.
Self-destruction is achieved by pressing A + B + C.
To change the image scale, press in game A + B.