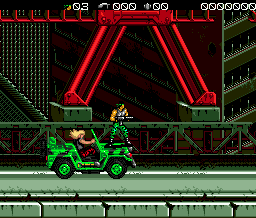 Genre: Action
Perspective: Side view
Gameplay: Platform
Setting: Cyberpunk / Dark Sci-Fi
Published by: SEGA of America
Developed by: Data East Corporation
Released: 1991
Platform: SEGA Genesis / Mega Drive
A good action in the role of the main bones. A peasant like Rambo, although it may be against anyone else, they now have a lot of these super-duper heroes. In this game, you need to destroy the enemies, in addition to collecting keys, which at the end of each level you can open new weapons. Graphics and sound are quite acceptable for Genesis.
Skip level: On the title screen, hold down the C button and press Start. Now, at any point in the game, click Start and press the A button. The level will be completed and you will start the game at a new level. After the last level you will go to the points screen.
‹
›
Home
View web version