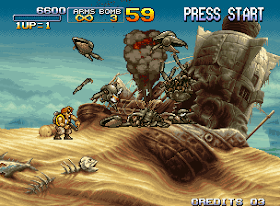 Genre: Action
Perspective: Side view
Visual: 2D scrolling
Gameplay: Platform, Shooter
Setting: Anime / Manga
Published by: SNK of America
Developed by: SNK Corporation
Released: 2001
Platform: Neo-Geo
Gameplay are the same as in previous Metal Slug games. But the novelty in Metal Slug, however, is the branching path system, in most missions, there are forking paths that the player chooses, each with their own obstacles, and of varying length and difficulty. All paths eventually lead to battle with the stage boss, but the player may have different outfits, and may have rescued more or less hostages depending on their choices.
In addition, the shape of Metal Slug 2 / X mummy, other shapes are taken by the player in various circumstances:
When hit with infectious material, the player becomes a zombie. Although medication is available to reverse the effect, the zombie player can make use of a devastating vomiting attack that covers most of the area ahead. The player may not squat, jump high, or make use of heavy weaponry or vehicles, but is immune to any attack by the rebels (except the Zubbed Rebels).
Underwater, the player equips a diving device with a foam helmet. Instead of grenades, the player uses a launch bomb system. Artillery is affected by gravity, but not so much by water.
If the player loses his air vehicle, they have a jet pack. They can fire guided missiles from the equipment.
Without the Astro Slug, the player also relies on a jet pack as well as a breathing apparatus (but not a space suit, interestingly). Explosives are contained in the equipment, when she shoots explodes in a fireball.
Although no new weapons have been added, Metal Slug 3 contains new vehicles for reader use:
The Driller Slug can be found in the underground part of level 4. When the player moves it you can activate your drill by knocking down all the enemies in front of him / her. It can also extend the drill which is much more powerful. Also, it can change your height by making the player inaccessible to enemies.
Mariner Slug gives some added fire to the submarines. It is large mass fires rounds that go to the bottom as well as torpedoes.
The Slug Elephant is a heavy elephant tied with a Vulcan cannon. When choosing a battery or a Chili Pepper, the elephant can shoot a lightning bolt or a fireball from its torso, respectively.
The Slug Ostrich is reminiscent of the Slug Camel. It's faster, it can jump farther, and it can spin around. (However, this makes the pilot momentarily vulnerable to enemy fire.)
The Armor lv Rebel Rebel is a production vehicle, but can be captured and used by the player. It comes equipped with a heavy machine gun, which is interchangeable with other handguns. (Unlike the Slugs, Rebel Armor's main armament has limited ammunition.) It also has a grenade launcher, a clatter claw attack, and jumping jets. The other player may be at the top of the Rebel Armor, and may receive a boost at extreme altitudes.
The Copter Slug appears along with the Flyer Slug in the air part of the Final Mission. Your Vulcan cannon can fire in all directions, unlike the Flyer. It is also armed with gravity bombs.
The Astro Slug is used jointly by players and rebel forces when it is revealed that General Morden is missing. boosters take you into space, where the player makes use of their weapons. Like the Rebel Armor, the Slug Astro can make use of infantry weapons through doors on its sides. It launches rockets as a secondary weapon.
In console versions, ported by Playmore, once Arcade Mode has been completed, there are two more mini-games: 'Conquest of Mothership UFO' and 'Fat Island'. This mode allows the player to control one of General Morden's soldiers, to rescue his fellow soldiers and attack UFO forces. The player can choose between the Riot Soldier shield, Soldier Bazooka and Grenade Soldier. The player is given a single life, this is counterbalanced by the number of reinforcements of other soldiers. Only one player can play in Attacking the Mothership UFO. There is no way for two players. Fat Island.

The rebellion orchestrated by General Morden to bring a new global regime is already ancient history, and order and peace began to return to the world. Morden, back in power, was attempting another coup, but government forces learned of the plot beforehand and anticipated the imminent attack.
Determined to crush Morden's rebel forces, Marco and Tarma of the Peregrine Falcon Attack Force are ordered to lead the team after their previous firing requests had been denied. Although General Morden has been listed as "disappeared" by his followers, they have been hiding all over the world, and Marco and Tarma with skills and experience are seen as a necessity to destroy the strongholds of the rebels one by one. Throughout the furious combat against the strongholds, Marco and Tarma can not help but suspect of the Morden involvement in this new evil plan to dominate the world.
However, the Sparrows, a special attack force within the government intelligence agency, came through a series of strange events parallel to the Pilgrim's achievement against General Morden's forces. From trivial abductions of animals to the disappearance of government officials and the appearance of frighteningly large creatures with innumerable occurrences leads one to believe that these events have a point in common for a somber possibility. General Morden is not the only threat to worry about. Eventually, it is discovered that the alien threat that appeared in Metal Slug 2 / Metal Slug X had returned. After defeating what appears to be General Morden, he becomes what appears to be a disguised alien, while the real Morden was his prisoner (again). The aliens kidnap the character that the player uses, and another character has his place. Once again, an alliance ad-hoc commission is formed to combat the external threat, with the Rebel Army providing a rocket that allows the player to break alien mother ship called Rugname. After a long battle throughout the ship's interior, Rugname begins to collapse from all damage. After destroying the core of the ship, the player must now rescue his partner facing green clones and no character of the captured character. Once the captured character is released, the clones begin to die, but some have turned into zombies. The player manages to escape, but is confronted by the leader of the aliens, Rootmars, when he falls through the Earth's atmosphere. Rootmars is defeated and left to die at sea. Upon seeing Morden and his men celebrating, the player's character shoots his weapon into the water in disgust.
‹
›
Home
View web version