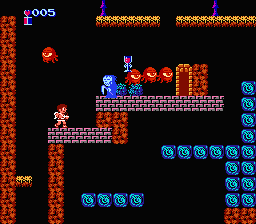 Genre: Action
Perspective: Side view
Visual: 2D scrolling
Gameplay: Platform
Art: Anime / Manga
Published by: Nintendo of America Inc.
Developed by: Nintendo R&D1, Tose Co.
Released: 1987
Platform: Nintendo (NES)
The plot of the game revolves around the campaign of the protagonist of the game Pete for the three sacred treasures, which he must use to save the mythical world of Angel Land and his ruler, the goddess Paluten, like the myths of Ancient Greece. The player controls Pete, jumping on platforms, fighting monsters and collecting items. The player's task is to reach the end of the levels and defeat the bosses that guard the three treasures. The game was developed by the Research and Development 1 department of Nintendo. The designers of the game were Toru Osawa and Yoshio Sakamoto, the management was carried out by Satoru Okada, and the producer was Gumpay Yokoi.
‹
›
Home
View web version