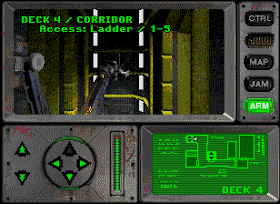 Genre: Action, Strategy / Tactics
Perspective: 1st-person
Art: Full Motion Video (FMV)
Setting: Sci-Fi / Futuristic
Published by: Spectrum Holobyte
Developed by: Drew Pictures
Released: 1994
Platforms: SEGA CD / Mega-CD, Windows 3.1
A near future. A military spacecraft, called Jeremiah Obrian, threatens with military action. And all because of the virus that killed the entire flight crew. However, this is not the most important thing. Someone is running an experimental Iron Helix gun (and sent it to Earth). You, as a professional in your business, must remotely control a robot, through which you need to investigate the entire ship and decide how to turn off and secure the gun.
But the most interesting thing is that you are looking for an enemy computer. So you need to predict its subsequent course in advance, since the delay between you and the robot is quite large. And the robot on the batteries, a long time to think and roam uselessly is not worth it. And in order to open the closed doors, it is necessary to find the personnel's DNA (with the help of a special scanning of the ship's surface), which has access to certain terminals.
The game was released for Macintosh and Windows.
‹
›
Home
View web version