Heart of the Alien (SEGA-CD) 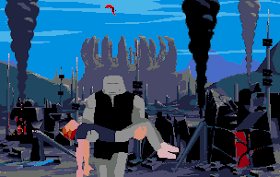 Genre: Action, Compilation
Perspective: Side view
Visual: 2D scrolling
Gameplay: Puzzle-solving
Setting: Sci-Fi / Futuristic
Published by: Virgin Interactive Entertainment
Developed by: Delphine Software International, Interplay Entertainment Corp.
Released: 1994
Platform: SEGA CD / Mega-CD
This is a sequel to the game Out of this World (Another World).
You start playing not for Professor Leicester, but for his buddy friend Buddy. The story begins just after the end of the first part. The villagers, where our friends flew on the pterodactyl, are still in a zombie state, so the newly-made daredevil Buddy rushed into battle to save them. You also have another mission - to find a way how to send home your friend Earthling Lester.
The gameplay is very similar to the one in the first part, but now (thank God!) A little easier. Of course, Buddy had some new moves (especially with his whip).
By the way, the disc also includes the first part of the game (as a bonus), so you can play with pleasure in the source.