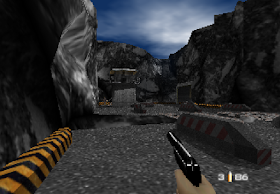 Genre: Action, FPS
Perspective: 1st-person
Gameplay: Shooter
Interface: Direct control
Narrative: Spy / espionage
Published by: Nintendo of America Inc.
Developed by: Rare
Released: 1997
Platform: Nintendo 64 (N64)
I think it's very difficult now to find someone who does not know who James Bond is, and the cult number "007" would not cause any association with this person. About this hero written a lot of books, shot about 30 films and, of course, created a huge (well, I would argue with - Gambit's comment) the number of games. As it is clear from the title - the game is created based on the film of the same name. Unfortunately, I can not say whether it follows its plot or not; The film did not look (it should be followed by the comment of the same Gambit). Perhaps after passing the game you will want to see the movie.
I'll start with graphics. The characters look just fine, and if it were not for the faces that look like masks, they would look straight like living. Those who watched the last series of "Hunting for the wapiti" will immediately be able to imagine them. In general, the characters are very similar to the actors, I think that in James Bond you can easily recognize Pierce Brosnan. Remarkably drawn characters' costumes, soldiers even have epaulettes, though without stars. Special attention was paid to small details. For example, in one of the missions you can see on the table a model of a car and a motorcycle. Very well painted walls and floors, especially in the laboratory and the train. And most of all I was pleased with the tiles, yes, the tiles - indeed, so similar to the real one. Quite realistic is the weapon, a little angular, but it's still done very well, because in any FPS weapons are always in sight and they always pay special attention. In general, the graphics in the game are gorgeous, but there is also a fly in the ointment: in the winter stages, the snow does not look very impressive, and the fir trees grow too close to each other - you can even say that they make up a "living" wall (apparently so image developers wanted to limit the size of the level). But the worst thing about the game is that there is absolutely no water in the mission where you enter the warship - blackness instead of it. However, this is just my nitpicking, in fact, the graphics in Golden Eye 007 are much better than in Tomorrow Never Dies on PS1.
Now about the gameplay. The game consists of 30 missions, during which you will have to try on the skin of an agent of Her Majesty. Before each mission, you will be shown a dossier, which is accompanied by a photo of the scene and a list of goals. Assignments will be the most spyware: to meet with some agent (even with 006 itself), to enter the protected building, to photograph, without raising alarms, a secret object, to replace the Golden Eye key, to save the hostages, to turn off the power supply, once even have to escape from prison. When performing some tasks, additional conditions appear, such as: to prevent the killing of scientists or hostages (key characters, too, should not suffer), minimize the killing of civilians. Of course, the 007th kills opponents not only with one glance. At his disposal is a wide choice of all kinds of weapons and various spy things. The main weapons, however, are only two types: a pistol with a silencer and hands (creeping up behind and cutting in a quiet way), but as soon as the enemy dies, the arsenal is immediately enriched. Most often these are various Russian and German automata, the Kalashnikov assault rifle is also present (KF7 SOVIET), there are also pistols, and even a sniper rifle. Still, there are mines that can explode some objects in missions, as well as plastic explosives. From spyware you have a watch with built-in laser and detonator, a camera in a matchbox, a security cracker and more. I forgot to say that before the beginning of each mission you are shown a small video showing the terrain and opponents. By the way, Russians, though terrorists, are not shown in caps with earflaps, as is commonly believed in America *, but in their special uniform. Still pleasing to the eye are inscriptions in Russian ** in some missions, it's nice to read the big letters "USSR" on a large rocket.
Separately want to say about management. It is good, but not excellent. There is the possibility of strafe and auto-targeting. Clicking on the "start" Bond (so want to say Snake) raises his hand and looks at the clock, where a new menu of 5 points opens. Here you can learn the status of the mission, interrupt it, clarify the goals, see the inventory, change management and settings. Very comfortably. The only negative control - it is inconvenient to tilt the arms diagonally.
Throughout the game you will be accompanied by traditional "Bond" melodies, which are made very soundly. They just create the militant's atmosphere and set the pace of the action.
And finally. For fans of multiplayer in the game there is an opportunity to play together, the three of us and even the four of us. A great opportunity to prove to each other who is the best agent. The game is worth playing to everyone. This is HIT. Even the famous American game journalist Zack Meston recognized the "Golden Eye 007" as the best action movie with a first-person view.
‹
›
Home
View web version