Escape from Monster Manor (3DO) 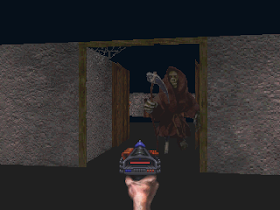 Genre: Action, FPS
Perspective: 1st-person
Gameplay: Shooter
Narrative: Horror
Published by: Electronic Arts
Developed by: Studio 3DO
Released: 1993
Platform: 3DO Interactive Multiplayer
Nothing except a little man with an electromagnetic gun. It is in his ridiculous and very miserable skin (from the first person) that you have to spend time playing Escape from Monster Manor - a game that is unsympathetic to horror, and simple as a shovel. Needing to move through the mazes, collecting keys and opening the doors (with the keys saving, for delivery to the points of reception of scrap metal), to find the pieces of the above device to show the troubles of human and stuffed animals to everyone. Naturally, this will be prevented if not by ills, then by ghosts and all evil spirits. They will need to shoot a pistol and they shorter all die of a heart attack, waves of your aggression and static electricity. In one you need to punch once, in others two, well, and at the end of the level, as a rule, an immortal creature from which you just need to escape.It's clear, not Killing Time before us and not even Wolfenstein 3D. Until the first is far from the schedule, to the second one by interest. Here you can remember only probably Iron Angel of the Apocalypse, but the truth with a yum. I mean, in Escape from Monster Manor there are rudiments of jokes and embryos of rallies. The music plays funny, the hanging in the most inappropriate places do their black work, in the sense of just hang. Against the backdrop of all this are scattered jewelry, the emblems "Red Cross" and power units, thanks to which your pistol like a pink rabbit, works, works and works again. This incidentally shown quite unusual. On the screen you can see only the hand with the gun, you can see the energy reserve on the gun, and on the hand judge the state of health. Well, originally so. There is no panel as in DOOM and no one is making a face of Stakhanovite.In Ravensburg, a young man was attached to a girl, but when he wanted to leave her, he lost a male member in a magical way, so he could not see him and felt only a smooth body. He was sad. One day he went to the wine cellar to buy some wine; while he was sitting there, a woman came to him, to whom he explained in detail the cause of his grief and showed her what had become of his body. This cunning woman asked if he suspects anyone. He called and told the whole story. Then the woman said: "It is necessary that you by force, since courtesy will not help, forced her to give you health." The young man in the dark night became shots from Escape from Monster Manor wait for the witch on the road, on which she usually passed; when he saw her, he asked to return his health; she replied that she was not guilty and did not know anything; then he pounced on her and began to strangle with a towel, shouting: "If you do not return my health, you will die from my hand." Since her face was already swollen and blue, she said: "All right, let me go and I'll cure you." When the young man loosened the knot of the loop, the witch touched his hand to his hips at the pubic and said: "Now you have what you wanted."
The young man, as he told later, before he was convinced of his eyes and touch, clearly felt that with a touch of a witch his member was restored.A little more about the schedule. It is not rich, but the levels differ in color and texture on the walls. These textures on the walls (though they themselves are walls) give some visual identity to the project. In addition to the visual identity in the game, there is the possibility of preserving itself after passing the level ... Or are there codes given? Or do not give? Cursed sclerosis. For something that exactly give, Duck is a detailed map. It will be detailed when you scrape all the walls on your own face, but even such happiness is not available in any game. If there was no map, I would not even recommend playing Escape from Monster Manor. Yes, I still do not recommend it. Escape from Monster Manor on 3DOBut you can still play. Perhaps some monotony will bother you, and from the tangled labyrinths night butterflies in swimsuits will start jumping before your eyes, but the smoothness of movements, unpretentious shooting and thematic music will allow you not to throw a game, say, 20 minutes. As time passes, you can switch to Slayer, that if not more interesting, then it is exactly more beautiful. This was my advice to you.

The start menu ("OPTIONS") consists of items, from top to bottom: music, sound effects, best results, captions, saving, downloading, a new game, a video showing - an introduction to the game. Confirm your choice by pressing A.
First, collect all the keys (just go over them), then open the doors in order (B). Collect all items, demons of all kinds kill (A). White stars with many rays add to you twenty cartridges (the red horizontal strip of your weapon increases). Red crosses - of course, medical assistance. The keys are not always visible in the corners, they need to get closer. Sometimes the keys are blocked by unnecessary red crosses or stars.
Clicking on C will show you the level of life energy (Health), weapons (Guns), the number of lives (Lives), points earned (Scores - they add to you coins and diamonds), unused keys (Keys) and the desired object (Look for or, after how it was found -Found). Clicking A, you will get a map on which you are marked with a red icon, the output is white. Talismans are shown with yellow dots, and doors - with green stripes. A compass next to the map will help you navigate.
Having collected half a million points, you will get one more life. Going to the unexplored area, use L and R.
At the stage where all the doors are open, the mascot is guided by a door in the center of the card (lower right). After discovering the talisman and destroying the main ghost, you can go to the exit (Exit), it is behind the right door in the uppermost section.
At the stage with the crypt you will need two keys. Look for one on the map at the bottom left, another one at the top right. The door at the bottom will take the mascot, the upper door leads to the exit.
The exit door of the last stage is at the bottom left. The mascot here is hidden at the top right.
Monsters Grim Reapers are unwieldy. The main thing is do not let yourself be cornered. Kill them from afar.
Ghost monsters are much more mobile and can act in an alliance with other monsters. A colorless semi-transparent ghost is harmless and you can not kill it.
Spitting Head Monsters are pretty fast; spittle is deadly. Attack them from a safe distance and only when they are purple, and not purple-bloody.
Spiders Spiders are the most annoying creatures in the game. They are small, but they can cause great harm. They go in groups, shooting at you. To get into them is difficult, aim at a short distance and only if you have a large stock of ammunition. If there is no ammo, then run!
‹
›
Home
View web version