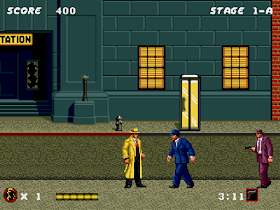 Genre: Action
Perspective: Platform
Visual: 2D scrolling
Gameplay: Beat 'em up / Brawler, Platform, Shooter
Published by: SEGA of America
Developed by: SEGA of America
Released: 1990
Platform: SEGA Genesis / Mega Drive
The game is an action and consists of several levels.
The levels in the game are constructed using 2D graphics and horizontal scrolling, which are divided into two types: game and bonus.
In game levels, the character moves to specific locations and destroys enemies; Each level must be completed before the elapsed time has elapsed (except for levels with car chases, limited path length). Also, some of the levels represent car chases for criminals, and the player controls the machine and the hero. At the same time, it is necessary to destroy criminals and avoid collisions with neighboring cars. At the end of most levels there are bosses.
During bonus levels (usually located between game levels), the character shoots training targets, depicting enemies and civilians; When you get into the image of a civilian, the bonus level ends.
The detective is armed with a pistol and a submachine gun. Weapons are used to protect enemies on either side of the hero, as well as at some distance from him; The weapon has a limited ammunition, which must be replenished during the level. Enemies - the people of Alfonso Caprice - are weak enough, but numerous; They are also armed with pistols and submachine guns.
‹
›
Home
View web version