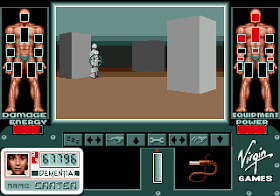 Genre: Action, FPS
Perspective: 1st-person
Gameplay: Puzzle elements, Shooter
Setting: Cyberpunk / Dark Sci-Fi
Published by: Virgin Games
Developed by: Core Design Ltd.
Released: 1992
Platform: SEGA Genesis / Mega Drive
This is one of the few first-person shooter games in 3D for Sega Genesis. True, by current standards this is not 3D, but now it's not about that. We can say that this game has some elements of RPG (Role-playing video game). You can buy in the store weapons, protection and other items. Also, as games are being developed, it will be necessary to improve the body, be treated, and so on. You play one of the 6 secret agents of the Zodiac organization. It can be either a man, or a woman, or an android. The main objective is to collect evidence against the UCC corporation, descending from the roof to the first floor. The Corporation conducts some secret genetic engineering experiments. As a result, monsters are obtained. As you know, you have to solve some tasks, riddles, collect keys, etc.

Useful password: FXAKBXAMGNAVGSGUIKOTBKDP
Restore life energy: Pause during the game and do not leave this mode for a while. After restarting the game, you will see that your energy has recovered. This secret operates anywhere in the game. The longer you stay in the pause mode, the more energy you will have. To pause the game, press the [Start] button, and then place the cursor on the first icon (three letters z) at the bottom of the screen. Then press the [B] button. To resume the game, press the [Start] button.
‹
›
Home
View web version