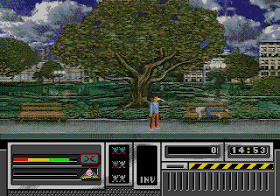 Genre: Action
Perspective: Side view
Gameplay: Platform, Puzzle-solving
Narrative: Spy / Espionage
Published by: OlderGames
Developed by: Digital Pictures
Released: 2002
Platform: SEGA CD / Mega-CD
Game Citizen X refers to the category of those games that at one time officially did not come out (Unreleased) for Sega Mega CD for some reason, and remained at the development stage. This game was brought to the state of the Beta version, and was due out in 1992-1993, which is so, and did not happen. The company Good Deal Games bought the game and the rights to its publications, and began selling the game in 2004. This game is curious because the company Digital Pictures is famous for the creation of FMV games. That is actually an interactive video. And then they decided to release a platformer with FMV.
The plot of the game tells that a certain terrorist organization with plans for world domination is attacking a city with a deadly poison gas. They promise to do more harm if their demands are not met. You have to play for an agent from a government anti-terrorist organization. You are immune to this toxin. Your task is to find the antidote and stop the terrorists. The game is complicated by the fact that everything about everything you have 15 minutes. You have to solve various puzzles and look for suitable keys, something like a game search for items.
‹
›
Home
View web version