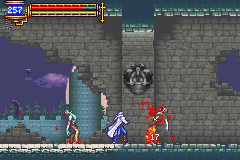 Genre: Action, Role-Playing (RPG)
Perspective: Side view
Visual: 2D scrolling
Gameplay: Metroidvania, Platform, Puzzle elements
Setting: Europe, Fantasy
Narrative: Horror
Published by: Konami of America
Developed by: Konami Computer Entertainment Tokyo
Released: 2003
Platform: Game Boy Advance (GBA)
The time of action is 2035, the main character is the schoolboy Soma Cruz, who entered the castle of Dracula, sealed in a solar eclipse. All this and much more openly hints that the new Castlevania is focused mainly on gamers of junior and middle school age. The art for the game has changed, the characters have acquired an anime character and not all of them shine with intelligence. Particularly surprising is the presence of a trader Hammer, who seems to have come up with for Hochma. According to the story, Soma and his friend Mina Hakuba fall into a mysterious castle and get acquainted with mysterious personalities, some of whom were direct participants in the legendary battle of 1999, when Dracula was finally defeated. In any case, it seemed so before the events of Aria of Sorrow.
The game is the same "Castelloid", as some of its predecessors. You have to explore a huge castle with many locations, simultaneously gaining many skills. Soma has a large arsenal of weapons, he can use swords, axes and brass knuckles, as did Alucard in Symphony of the Night, but the arsenal of the schoolboy is wider - he also has spears, hammers and pistols. There is no additional weapon here. Instead, the main character uses the souls of monsters. Each enemy and some of the bosses after death can leave Soma a soul, giving this or that ability. Some change the status indicators of the hero, others open up new opportunities (fly, swim, see hidden passages). And there are souls that give the ability to attack. Now you can throw bones, turn into huge and powerful monsters, attack with flimans, spew fire or laser beams, and much, much more. Most souls spend magical energy when used - it can be replenished with potions and hearts knocked out of candles. The relics that give the hero new skills, as in Symphony of the Night, there is no - they are replaced by the same soul. And if you collect the souls of absolutely all monsters in the game, you will receive a valuable gift and a more complete ending to your adventures. By the way, the ability to use the power of monsters was first introduced in Castlevania: Legends. Here it simply expanded and improved, making it one of the main elements of the game.
Since the time of the Symphony, the formula of the game has been subjected to some pleasant improvements. The overall complexity has slightly increased: now the player, even after pumping and typing mountains of a useful arsenal, will not feel like a king giving out kicks to weak monsters. Artificial intelligence of enemies is very good, perhaps, opponents in the Aria are smarter than in other metro-assignments, both in the previous and later ones, published on the DS. Heavy souls help you pass the castle very much, but at the same time they consume a lot of magical energy, and you will not use them every second. All this provides the game some semblance of balance.
From the strange tradition of making Dracula's castle in duplicate, the developers this time refused. There is no inverted palace or a second kind of castle in the game. Abode of Dracula in Aria of Sorrow is unique and unique, and, after examining the castle in the usual way, the player will receive a clear 100% card, as expected. The zone of the final boss - the Reality of Chaos - is essentially outside the castle. In general, traveling has become easier and more enjoyable. Teleporting, you do not have to go to all the portals along the way, the desired pass can be easily selected on the map. Another useful innovation: now the trader can buy from you any product, not just precious stones. Sold out all the extra junk, you can free up space in the arsenal, and save money for something really needed.
Graphics in Aria of Sorrow is pleasant, without bright-acid shades. Sprites of enemies and bosses are completely new, although some of the monsters put on their eyes in previous games of the series. Music was done by Michiru Yamane, so everything is in order with the music. Many interesting and memorable motifs, thanks to which the journey through the castle proceeds easily and comfortably. Separately I want to note the themes of the Corridor and the Sentry Tower, executed in the classic "fighting" style of the old games of the series. Bosses in Aria of Sorrow with rare exceptions are not difficult. Though some of them, especially at the first acquaintance can fairly drive: for example, the permanent servant Dracula - Death and the final boss - the personification of the primordial Chaos. But with the use of shower, they certainly are not capable of delivering problems even to those who are just beginning their acquaintance with the Castlevania series. By tradition, Aria of Sorrow has several alternative endings, and as bonuses there is an opportunity to play in a complicated version of the game and in the regime for Julius Belmont.
Castlevania: Aria of Sorrow is unlikely to deserve the title of a masterpiece for all time, but it certainly will give you several hours of fascinating adventure in a mystical castle.
‹
›
Home
View web version