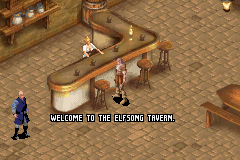 Genre: Action, Role-Playing (RPG)
Visual: Isometric
Setting: Fantasy
Published by: Destination Software
Developed by: Magic Pockets SAS
Released: 2004
Platform: Game Boy Advance (GBA)
In the game, the threat of the city Baldur's Gate by Eldrith is described as the traitor and the Dark Alliance, which is named for the game. The former general lady of the city tries to avenge herself with the help of her allies at the heart of the city for her death and the lack of help in her fight against the orcs.
The introversion of the game describes the arrival of the three possible player characters in the city Baldur's Gate and how they become victims of a robbery of a thieves. This dingy has only recently dominated the night streets of the city and posed an increasing threat to the safety of its inhabitants. Starting out from the Elvenliedtaverne in Baldur's Gate, the player goes to the search for the organization's back-men and encounters the large-scale Conspiracy that transcends the city's immediate environment. With the help of travel portals, the player reaches other areas of Baldur's gate-surrounding western heartland and finally meets the so-called Onyxturm in Chelimber Moor. In their exile, the player must defeat Eldrith to end the game.
A special feature of the narrative is that although the player is committed to one of the three characters and directs him alone through the game world, always a common action of the three heroic characters.

Baldur's Gate: Dark Alliance is a console player of Baldur's Gate computer game in the world of Dungeons & Dragons. There is, however, no commonality with regard to the action or play. Dark Alliance is a Diablo-style action RPG. The player chooses his main character at the beginning from three predefined figures: the Arcane Archer Vahn, the Elven Enemy Adrianna and the Dwarf Warrior Kromlech. In addition, a bonus character will be unlocked after completing the game with Drizzt Do'Urden. A free character generation as in Baldur's Gate or Icewind Dale is largely absent.
The player controls his / her character directly from the perspective of the game with the help of the gamepad, with a freely rotatable camera that can be zoomed in three steps. The battle is played in real time. By solving tasks and killing opponents, the player collects, as in rolling games, customary points of experience that allow him to expand the abilities of the character while reaching certain point limits. The development possibilities of the characters are given by a very limited skill tree within comparatively narrow limits. The selection of skills is predominantly campaign-oriented. In favor of the action-oriented game principle and thus, in contrast to the underlying D & D rule set, mana energy is consumed for the use of spells. The preparation of spells is thereby eliminated. In addition to action-oriented battles, there are dexterity and jumping passes, as well as simple counter-puzzles. To save the game, the player must search for specific points in the game world.
‹
›
Home
View web version