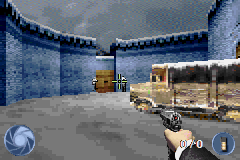 Genre: Action, FPS
Perspective: 1st-person
Gameplay: Shooter
Narrative: Spy / Espionage
Published by: Electronic Arts
Developed by: JV Games
Released: 2003
Platform: Game Boy Advance (GBA)
Mr. Raphael Drake, the head of the industrial company Fenix Inc. And a well-known criminal, whose reason for the arrest has long been sought by the Secret Intelligence Service, intends to capture the orbital station of anti-missile defense.
The task of the protagonist of the game, the secret agent of James Bond, is to stop Drake.
Gameplay James Bond 007: Nightfire is typical enough for the genre of a 3D first-person shooter. The player must fight with opponents, moving through the levels. Thanks to the elements of stealth action, the player often needs to use various spy devices to sneak into the object where the task is to be performed (at the same time, at some levels one can go "ahead" without observing the silence).
‹
›
Home
View web version