The Revenge of Shinobi (SEGA) 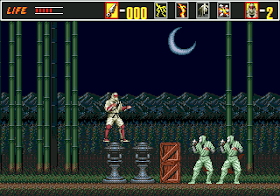 Genre: Action
Perspective: Side view
Visual: 2D scrolling
Gameplay: Platform
Published by: SEGA of America
Developed by: SEGA Enterprises Ltd.
Released: 1989
Platform: SEGA Genesis / Mega Drive
A popular series of arcade games, telling about the adventures of the Japanese warrior. It was these games that brought Sega's sales to a decent level.
The game is impressive and today its 2D graphics. Animation is a bit limited, but it does not spoil the overall picture.
The first game from the series - Shinobi, was released for the Sega Master System in 1987.
Revenge of Shinobi 1989, it's Super Shinobi - the game is as close as possible to the arcade original, published by Rage Games.