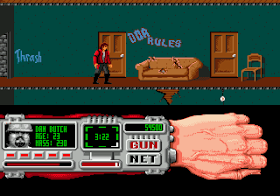 Genre: Action, Racing / Driving
Perspective: Behind view, Side view
Visual: 2D scrolling
Gameplay: Arcade
Setting: Cyberpunk / Dark Sci-Fi
Published by: RazorSoft
Developed by: Gray Matter, Imagexcel
Released: 1990
Platform: SEGA Genesis / Mega Drive
The game will play for a policeman who fights against criminals in the city of the future.
The game consists of two types of levels: several locations and levels by which the player moves on the car.
Levels-locations are buildings in one or several floors, on which there are many enemies and traps. The floors are connected by elevators. Here, the player must, within a certain time, find and defeat the "boss" (or arrest him). At the end of time, regardless of whether the boss is defeated or not, the character returns to the machine to get to the next level.
During the movement on the car, you need to shoot (or drive around) cars.
Additional Lives: At any time during the game, while inside the building (room), put the game on pause. This is done by pressing the Start button. Then enter the following combination of C buttons - ten times, A - five times, B - two times, A - ten times. If the code is entered correctly, the sound of the Technocop will be heard.
‹
›
Home
View web version