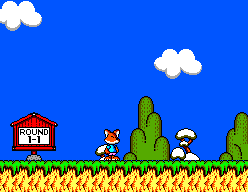 Genre: Action
Perspective: Side view
Visual: 2D scrolling
Gameplay: Platform
Published by: SEGA of America
Developed by: Vic Tokai Corporation
Released: 1989
Platform: SEGA Master System
You are a Fox, obviously extraordinary, once by the click of a psycho! Mission - to save the world from the evil baka Madfox Daimyojin. This bika is also a fox who sends out fanciful creatures to conquer the world. You can transform into other animals to help yourself go through some obstacles. Remember, you are not an ordinary fox, you are a Psycho Fox!
I want to note that the Brazilians (and in general amateurs hack games), this game clearly fell in love. I know more than a dozen hacks of this game!
One of the latest games released in the US. The game has a lot in common with the game NES - Kid Kool, and this is a kind of predecessor of the games SEGA Genesis - Magical Flying Hat Turbo Adventure / Decap Attack!
‹
›
Home
View web version