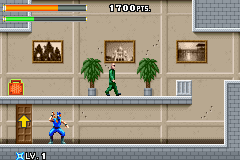 Genre: Action
Perspective: Side view
Gameplay: Arcade, Fighting, Martial Arts, Platform
Published by: Konami of America
Developed by: Hudson Soft Company
Released: 2003
Platform: Game Boy Advance (GBA)
When people tell me about good ninja games, I immediately remember Gaiden, Shinobi, but with this game is not worse. Sharpen your katana, because there will be many missions, and the spilled blood of terrorists is even greater. Possessing a cutting-piercing weapon, syurikans (which can be improved by collecting lightning objects, up to three-charged fireballs and a laser beam), and also a ghoul, which can be attracted to surfaces and platforms, you will perform acrobatic jumps on the heads of unfortunate enemies and throw from afar In them shurikens. Saving the hostages and collecting the keys from the boxes, you will need to go to the very end of the level, for the final battle with the boss. The graphics are too small, but this does not spoil the sense of the game, but rather leaves room for thinking about the next move and defeating the enemy. Beware of the same ninja as you, they are fast, strong and dexterous.
‹
›
Home
View web version