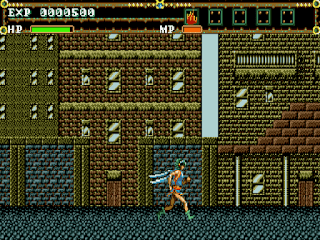 Genre: Action
Perspective: Side view
Visual: 2D scrolling
Art: Anime / Manga
Published by: Renovation Products
Developed by: Wolf Team
Released: 1991
Platform: SEGA Genesis / Mega Drive
From the creators of the Valis game series. The game tells of a young warrior woman who skillfully owns her traditional boomerang. She has since 1928 reached New York with a personal vendetta against the leader of the bandits and his henchmen.
This game still demonstrates one of the many oddities of Japanese platformers, in which stylish anime cutscene are better than the game itself. Boomerangs against the cannons Tommy and Harley? Wake up, go back to reality! The gameplay and music are decent, sometimes even very. Fans of the Valis series and good Japanese platformers are ...

This trick will allow you to obtain a full set of magical powers, without collecting any objects. During the game, pause and press UP, LEFT, RIGHT, DOWN and C. Each time you do this, you will receive one magical power. Repeat this combination for all five magical powers.

Pause at any time after the start of the game. During a pause, press UP, LEFT, RIGHT, DOWN and A. Now you can move slowly (this does not affect sound effects).

At any point in the game, pause and press UP, LEFT, RIGHT, DOWN and B. Now you can jump from the stage you're on and jump to the next.
‹
›
Home
View web version