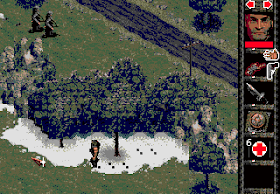 Genre: Strategy / Tactics
Perspective: Bird's-eye view
Visual: Free-roaming camera, Isometric
Gameplay: Stealth
Pacing: Real-Time
Setting: Africa, Europe, Historical Events, World War II
Narrative: War
Interface: Multiple Units / Characters Control, Point and Select
Published by: Glory Sun, New Game (Company)
Developed by: Hummer Software, Dragon Co.
Released: 2010
Platform: SEGA Genesis / Mega Drive
A realistic and beautiful strategy game. Transfer from PC. We manage several heroes that commit various acts of sabotage during the Second World War. The territory is patrolled by many enemies, although they can not be removed, it is enough to get through and fulfill the purpose of the mission. But this requires sufficient effort. Each managed character has its own arsenal, each is unique, but to fulfill the mission, you need to protect everyone. It turns out really tense, and from that interesting action! In each mission, different tasks, terrain, enemies. Weapons and adaptations: here and a pistol, and a knife, and grenades, and camouflage of the enemy. You can also use the furnishings. A similar thing on Sega Genesis is of undoubted interest.