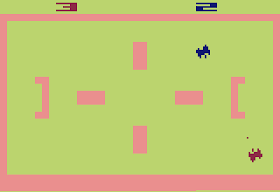 Genre: Action
Perspective: Top-down
Visual: Fixed / Flip-screen
Gameplay: Shooter
Interface: Direct Control
Vehicular: Flight / Aviation, Tank
Published by: Atari
Developed by: Atari
Released: 1977
Platform: Atari 2600
Combat (1977) originated from Call of Duty, Battlefield and other modern online shooters. This is the most common cartridge in the nature for Atari - one of nine games from the console's launch line. The game has 27 kinds of defmatch, most of which look like a duel of blue and red tanschikov on a green background. The system of using shelters in the game is - the wedges are hidden from each other behind the walls of a rudimentary labyrinth. In the most extreme variations, the tanks throw shells, like bits of Pong, or become invisible and hunt one after the other for touch, like two submarines or Klingon ships in Star Trek. The rest of the game modes are devoted to the battles of airplanes: one player controls a giant symbolic bomber, the other - just three no less symbolic fighters.
‹
›
Home
View web version