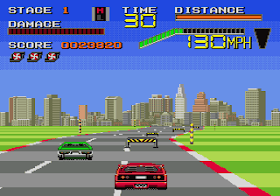 Genre: Action, Racing / Driving
Perspective: Behind view
Vehicular: Automobile, Truck
Narrative: Crime
Published by: Taito America Corporation
Developed by: ITL Co.
Released: 1992
Platform: SEGA Genesis / Mega Drive
The game was very warmly accepted in the gaming industry. The performance technique resembled the popular game "Outrun" from "SEGA" (1986), but in addition to the race for a time there was a chase. Two sequels were released - "Chase H.Q. II: Special Criminal Investigation "(1989) and" Super Chase H.Q. "(1992). «Chase H.Q. II: Special Criminal Investigation »is an improved first part with a new possibility of shooting on the pursued car. For this, the driver's partner protrudes from the car, holding a pistol in his hand. With a police helicopter, you can get an additional weapon - a grenade launcher (it deals more damage to the enemy than a pistol). The transmission is fully automatic. In "Super Chase H.Q." the player watched the gameplay from the "first person".
‹
›
Home
View web version