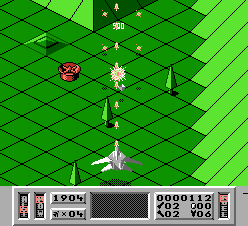 Genre: Action
Perspective: Behind view, Bird's-eye view
Visual: 2D scrolling
Gameplay: Arcade
Vehicular: Flight / Aviation
Published by: Milton Bradley Co.
Developed by: Rare
Released: 1990
Platform: Nintendo (NES)
The plot of the game is this. The planet Earth is approaching the space base of enemy-minded aliens who are burning with the desire to destroy all the inhabitants of the planet. Regular troops, as always, do not suffice, and the command sends the pilot of the space fighter, Captain Skyhawk, alone to get rid of the enemy. The enemy has several planets on which generators are located, feeding from the main base. Until they are destroyed, it is impossible to deal with the aliens. Therefore, first the hero will have to deal with the destruction of the generators, and in passing save from the captivity all important personalities.
So, we operate a fighter that can fly both in the atmosphere and in the airless space. Outwardly, this device is somewhat reminiscent of the "Macross" grapes, but it is not capable of transforming. Landscapes, among which there are battles, are made in an isometric projection, with imitation of a vector without a textural image. Opponents are also represented in the form of sprites and have a strict trajectory of motion.
The view of the aircraft varies depending on the stage of the level:
Initially, this is a normal top view: we have the possibility of a maneuver left-right and above-below (a high-flying aircraft is easier to escape from shots from the ground and easily bypasses small elevations). Depending on the landscape, Skyhawk's enemies are tanks, boats, helicopters, as well as stationary bunkers, in the form of simply hills or sphinxes. All enemies are destroyed with a single shot, as, indeed, our flying apparatus. At the last levels there are very maneuverable fighters, which can only be hit with a dozen volleys. At the end of the stage there is a fortified base of several firing points. After knocking them, we move on. Sometimes the goal of such a stage is not to suppress the fire, but to bombard the two wells among the level - by throwing a bomb in them, we are transferred further.
The second stage is a view of the plane from the rear and something like the game "Sky Destroyer". Either the airplanes of the enemy fly by either in the direction of the player's plane's movement. They need to be knocked down, trying to catch in the square sight. With the increasing complexity of the levels, the opponents begin to fire at us with missiles, the radius of which is greater than the airplane itself. Boss in the end there - you just need to hold out until the end of the level.
The third stage has no enemies - we just need to fly into the rotating gateway of the space port. To do this, you need to brake exactly in the middle of the screen (view of the plane, as in the second stage, from behind) and wait until the slit gap is in the same plane with the fighter's horizontal, twist. At this stage, the amount of points earned by us on this and the previous two stages is calculated and, based on them, it is possible to purchase additional weapons.
All these three stages represent one level, which in game eight - with increasing complexity and speed, as well as small variations in the first stage: sometimes instead of simply destroying the energy center you need to save the man or bomb the pits with a secret weapon. At the last, eighth level, in the third stage, instead of the native base, we encounter the main alien ship. That is a kind of a snowflake - a branched net of small guns in the form of a regular pattern. All the guns are fired from one shot. In the center is a huge eye that opens when all the cannons are pummeled. Shots are also fired from it, but it is much easier to avoid them. In addition, if you stand exactly in the middle of the screen, then the enemy can not get into us at all. After about five hits, the base explodes, and the screen illuminates the coveted inscription "Game Over". Then we are asked to enter your name in the high score table (if enough points are enough for this), which here moved, apparently, from the Arcade machines. This concludes the game.
It is noteworthy that the music for this game was written by the famous English composer David Wise (David Wise), who worked at the company "Rare". He was involved in creating tracks for such hits as: "Donkey Kong Country" for SNES (plus for many parts based on the Donkey Kong series for different gaming systems, including SNES, Game Boy, Nintendo 64, Game Boy Color , Nintendo DS), Battletoads (for arcade machines, NES and Game Boy), Cabal (NES), Time Lord (NES), Arch Rivals (NES), Super RC Pro-Am Parts and versions for NES and SEGA Genesis / Mega Drive) and for many, many other games in the period of 1987... 2008. So, for the quality of the musical accompaniment you do not have to worry.
In general, the game makes a very pleasant impression. Graphics, sound and gameplay - at altitude. The game is recommended not only for familiarization, but also for walkthrough.
‹
›
Home
View web version