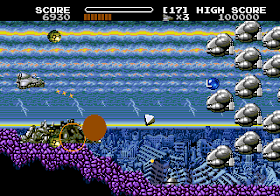 Genre: Action
Perspective: Side view
Visual: 2D scrolling
Gameplay: Arcade, Shooter
Setting: Sci-Fi / Futuristic
Published by: UPL Co.
Developed by: NMK Co.
Released: 1991
Platform: SEGA Genesis / Mega Drive
And it seems again the planet Earth was under attack by unknown aliens.
And again, courageous pilots are sent into battle, what would be the last time to repel incommensurable forces that flew from the depths of space, for not very clear reasons.
But if you are attracted to games of this genre, you will probably be more interested in the gameplay than the reasons why two unequal forces are engaged in a fierce battle.
Having taken control of the ship, and taking your companion, you will find the moment that the ship can be controlled in two ways.
The first option is standard, moving the ship across the screen, you are firing at enemies that creep out on the battlefield, they answer you the same.
In the second option, leaving the control of the fighter, you switch to the place of the second arrow, and already controlling the sight, trying to bring down the creeping aliens.
Combining both options, you have to break through the enemy forces, get to the head ship, and stop the invasion.
Known in Japan as Space Battleship Gomora.
‹
›
Home
View web version