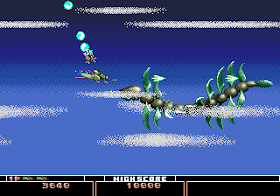 Genre: Action
Perspective: Side view
Visual: 2D scrolling
Gameplay: Arcade, Shooter
Setting: Sci-Fi / Futuristic
Published by: SEGA of America
Developed by: SEGA Enterprises Ltd.
Released: 1992
Platform: SEGA Genesis / Mega Drive
Another mad flight. The choice of 4 aircraft (if it can be called aircraft). Naturally, your hero is opposed by hordes of enemy creatures. The fate of most of them is known - to take heroic death at the hands of your ruthless destroyer. A set of weapons for this is sufficient, besides, holding the button of fire, you can strengthen the volleys. A game for 1-2 players with five levels of difficulty. Japanese version: Crying.