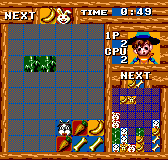 Genre: Puzzle
Pacing: Real-Time
Gameplay: Falling Block Puzzle
Published by: Tec Toy Industria de Brinquedos S.A.
Developed by: Sega AM3 R&D Division
Released: 1998
Platform: SEGA Master System
Game like Dr. Mario at NES and Dr. Robotniks Mean Bean Machine on SEGA. In the vessel fall blocks of 2 cubes in each. Cubes can be divided into 2 types: animals and food. If the food gets to the animal, which it eats, then the cubes disappear. In the game there are oponents. If the opponent turns a large combination of coincidences, then blocks fall on you. The same can be done against the computer. The bigger the combination, the more damage. The game has 3 levels of difficulty.
Ported with Game Gear.
Plot
The zoo is looking for a new owner, so that he watches in good faith for the animals. To achieve this, the applicant needs to pass many tests. Graphics, I want to note, excellent, take a look at the year of release; About the sound is not sure.
‹
›
Home
View web version