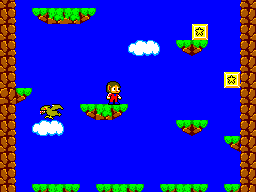 Genre: Action
Perspective: Side view
Visual: 2D scrolling
Gameplay: Platform
Published by: SEGA of America
Developed by: SEGA Enterprises Ltd.
Released: 1986
Platform: SEGA Master System (MS)
Many centuries ago, on the planet Eris, a little boy Alex Kidd appeared. He knew little about his parents, because from the smallest years, as he remembered himself, he spent on the Mount of Eternity, studying the ancient art, which allows splitting stones into pieces. In our old records, this martial art is known as Lushcheniye Shishkek, and for foreigners it is known as Shellcore.
Seven years later, Alex descended from the mountain, in the intention to go in search of his spiritual homeland. On his way he met a dense old man. He told that Alex is actually the prince of the country with the capital in the city of Radaktian, kidnapped in the early childhood by some villain. And more importantly, there was a threat over his country. Magnificent Dzhanken, a vicious tyrant, without any qualms about conscience, is ready to destroy the rebellious population. Before going to a better world, the elder gave Alex a piece of a card and a medallion from the Sunstone.
What does this all mean? The only way to find out is to go on a trip to the Wonderful World, and find out everything yourself.

From the very beginning it was hard to play. Naughty management, confused buttons of impact-jumping - it was necessary to get used minutes. 5. The antiquity of the game is decent, so, it took some time to get used to the visual component. If you evaluate only the first levels, as I did at first - it's completely incomprehensible, for which the game is called one of the greatest produced by Sega. They are completely primitive, short, platform, interspersed with snorkeling and playing "scissors-paper-stone." But later it becomes clear why the management is exactly the way it is. Be it clear - the game would be played at a time.
And only as you go through the game you start to love. Adapt to the management, you know that with the run-up Alex jumps higher, so you can collect more money. In the process there is an opportunity to drive on motsik, helicopter and boat - this is a very strong side of the game, as few platformers are so transformed into racing and flying-shooter, especially if you do not forget about the year of release. And once you get into the castles, it becomes clear - the most interesting is reserved for later. In addition, the manual promises us 11 locations, so I'm about a third of the game is about to see the "gamover", and the game went on and on, and the farther away, the more fun. Role elements are also present - these are dialogs and objects that give certain abilities, or necessary for passage. In the castles an element of adventure appears, on the one hand - in the tangled labyrinths you will have to use objects, and on the other, without an excellent reaction in some rooms, you simply can not survive.
That's what upset me, so it's the bosses. Beat them simply and uninteresting, gave several times in the face and ready. And the background - where ruddy clouds and stuff, which is so diluted the gameplay in the case of Mario? In the rest, the game balance is kept to the smallest detail, and in combination with downhole music and bright graphics has to complete the passage, besides, not once or twice.

The game was conceived by Ossale Kohta, who is also Kotaro Hayashida, who later wrote the script for Phantasy Star and Phantasy Star II, and also put his hand to the early games of Master System: Pit-Pot, Woody Pop, Pro Wrestling, Zillion and Fantasy Zone .
17 completely different level. Decent answer from Mario. Authoritative publications gave very high marks to the game, and in principle, I fully agree with them. Looking for a sequel - run Alex Kidd in the Enchanted Castle.
Alex Kidd in Miracle World, as we already know, was released in 1986 and reissued in 1990, being built into the latest Master System models and all Master System II, replacing Snail Maze / Safari Hunt / Hang-On. In SMS II, the attack and jumps were reversed, as gaming standards already dictated their preferences. In addition, rice balls have been replaced with hamburgers - the brains of Western gamers are so much simpler.
Few people know that based on the game was released a board game, such as Monopoly and more pencil cases with symbols.
Around 2000, there was a fan game for Windows based on Miracle World: Alex Kidd: Return to Miracle World from Badoona. In 2000 he, at the age of 15, began to build your platformer, using for this The Games Factory. It is generally played normally.
Later, the year so in 2005 Punisher (Hamster), using Multimedia Fusion makes its "remake": Alex Kidd miracle world. The game sounds great, but with control some sort of crap.
Still there are remakes from Darmon Xavier (I did not start) and Daniel Mafra (I did not find it).
On June 23, 2008, the game became available on the Wii for 500 points. Now it has already risen to 600. In real money it's about 3.5 pounds or 5 euros.
On May 23, 2012, complete with Super Hang-On and The Revenge of Shinobi, the game was released for Xbox Live Arcade and PlayStation Network as Sega Vintage Collection: Alex Kidd and Co.
‹
›
Home
View web version