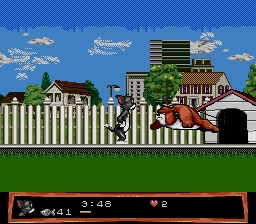 Genre: Action
Perspective: Side view
Gameplay: Platform
Published by: Hi-Tech Expressions
Developed by: Beam Software Pty.
Released: 1994
Platform: SEGA Genesis / Mega Drive
Tom & Jerry is a famous cartoon film in which Tom's poor tomcat chases Jerry's mouse all his life. Where and by whom they just were not, and so on for thousands of episodes, until the creators made a full-length cartoon "Tom and Jerry: The Movie" (1992).
The plot unfolds as you progress through the game, it is strongly interwoven with the story from the cartoon, but it should be so, because the game is based on the cartoon. It all starts with the fact that Tom woke up early in the morning and found that his family was going, somewhere to move, and the house - to demolish. All would be well, but before leaving Tom hammered a mink with a mouse. Tom runs to save Jerry, but at this time his family leaves, and Tom and Jerry remain left to themselves. After a long wanderings, Tom and Jerry meet one unhappy girl who goes in search of her father. Tom and Jerry join her, and their adventures continue.
As it is supposed for such games made on the cartoon or film, we will proceed completely on the story line - there are no cavils here. Everything goes in a row: first the yard, then - the house that is demolished, then - the street, etc. So in this regard, the developers gave us a full-scale cartoon in which something depends on us.
In the game, we now and then have to play for the two main characters - Tom and Jerry. Of course, most of the game we will play for Tom, but Jerry will also please us with his presence. Who, if not these two wonderful characters can give us a few minutes, and maybe hours of joy?
As in other similar games of this genre, we have to run, jump to collect all sorts of things: if we are a cat, it will be a fish, if the mouse is cheese. But fish and cheese are two varieties - small and large. One hundred pieces of small given one life, and if we take more, then we add lost health. What distinguishes this game from other similar ones is the fact that we can not simply kill an enemy by jumping on our head, we will not be able to run like a runner, like Sonic. But we can kill the enemy in another way, taking an object and throwing it, for example, with a ball, sticks, whips, hatches, bulbs, etc. Also in the game there are cookies that need to be collected, but this will not be easy, since they are very cleverly hidden. By collecting four cookies (their total at level four), you will get one life and replenish your health.
There are a lot of enemies in the game: birds, fish, different mice, etc. In none of the rounds will the enemies almost repeat themselves. In addition to them, the passage of the level will be hampered by the various traps falling directly to us on the head of chandeliers and vases, pits in which you can easily fall down, exploding televisions. In the last round, we have to take part in extinguishing the fire and, of course, fight the leader.
In some rounds we will need to perform various tasks, for example, to collect pieces of the letter or to include some equipment.
Very interesting mode for two players. We play on one screen with Tom and Jerry, so in one round there is both cheese and fish. And when you collect all four cookies, health is added immediately to two, but life is given one. It is better to pass the game together, because firstly - it is more interesting to play, and secondly - it is easier, because it gives twice as much time and lives. But the only inconvenience is that one of the characters may be behind. Thus, we will only see one character on the screen. But you can switch to the second one so that he can catch up with the other.
In the second round, playing one, Tom rescues the mouse from the trap, in a two-player mode this does not happen, we just run out into the street.
When you play this game, you get the impression that you become the hero of the cartoon. Probably, it should be so, because games are created to make us feel like a character. So it is or not, it is not important, the main thing is that the game is very colorful graphics - how well drawn all the characters (although it seems that the front legs are broken, but it does not interfere). And what colorful, detailed backgrounds - they need only be seen. Although, in some levels, they are almost invisible.
As it seemed to me, the music in this game plays a significant role, it determines the speed of the game. Then it subconsciously slows us down so that we are more cautious, then on the contrary, cheers and accelerates.
In general, the game turned out to be excellent, worth your attention and that you spent on it at least a dozen minutes.

All codes are entered on the title screen, where Press Start flashes. The sound of the machine beep (signal) will confirm the correctness of the code entry.
Freezes Timer: As the code enter Up, Left, Down, A, B, Right, Left, Down, A. After you start the game, the time will not go.
Invincible: Enter the following combination of Up, Up, Left, Right, Right, Down, B, B, A. After that, you will gain invincibility in the game. The character simply will not interact with the enemies, but he can still die in the pit.
Level Select / World Selection: Enter the following combination of Up, Down, Left, Right, A, A, B, Down, Up. After you press Start, the level selection screen appears.
View Ending: Enter the following code A, A, Down, Up, Down, Up, Left, Right, B. After you press the start button, the end screen appears.