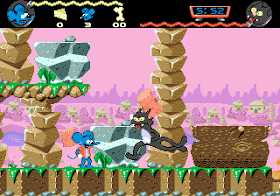 Genre: Action
Perspective: 3rd-person, Side view
Gameplay: Arcade, Fighting, Platform
Published by: unpublished
Developed by: Bits Studios
Released: 1995
Platform: SEGA Genesis / Mega Drive
Almost two years have passed since I discovered the wonderful animated series The Simpsons, and still sometimes I find time to rejoice over the previously seen series or remember the golden old ones.
Yes, yes, do not be surprised, most of our editorial staff consider viewing some animated series quite natural for any age. Experienced gamers know that in any art is not important form, and content! And because the "Simpsons", despite their unusual drawing and sometimes very childish jokes, find fans in all age groups - after all, in fact it is very frank and truthful, albeit in part
an exaggerated reflection of the real life of the population of the provincial American town on weekdays and festivals of the fictional Springfield. And eruptions of humor are often in force not inferior to the best of the "adult" comedies! Although they lose a lot from even the best translation.
But many "simpsonophiles", it seems to me, watch the series because of a very specific group of jokes that can not be translated. What kind of American cartoon creator will miss the opportunity to make fun of their heroes in a truly cartoonish style. And the glorious followers of Charlie Chaplin reached their tops, undoubtedly, in the favorite series of Springfield teens "The Ticket and Scratch Show." The only need for the heroes of this show is to get the partner-opponent harder, thanks to the authors' fantasy, accepts terrifying scales, causing spectators to get hysterical laughs.
Not surprisingly, Acclaim, which has developed at least three games for different consoles based on the series, has created one more exclusively on the basis of this "sub-series". And, in my opinion, has reached the heights in his work! The original idea is fully respected: throughout the game, all that matters is the constant torture of the heroes of the show each other with various improvised means. And there are a lot of these means, so it's almost impossible to get pleasure from watching the process of the game, than from watching the "cut-outs" of the cartoon show. If, of course, the player chooses a simplified version of the game. Because of the level of complexity in it a lot depends - and the survivability of the hero, and the stamina of his opponent, and the behavior of "squires". Therefore, Easy will be able to beginner gamer and play, and more experienced with interest to rest and have fun. But Hard passes really with great difficulty, well at least continuations are endless.
Each of the seven levels is divided into two parts. In the first you compete with the enemy on an equal footing, you search for prizes and weapons, avoiding the inhabitants of the battlefield, and in the second you try to smuggle an enemy out of the "machine of death" by means of a special weapon. The battle goes to the last blood (ie, when one of the rivals does not remain a drop). For players on the level above Easy pair of tips. The search for prizes will not bring victory - sooner or later your rival will find a long-range weapon, and he manages to shoot better. Therefore, try to find a place isolated horizontally, through which run miniature clockwork toys, and other inmates do not attend. You can calmly beat off the hopeless attacks of the enemy and make (in the literal sense!) The capital-arsenal for single combat in the second part. For there the question of limiting time will already be seriously raised, and it will not be easy to beat shells from "squires" under deadly fire. It is good though that the loss of life keeps the accumulated ammunition.

Familiar for the "Flintstones" landscapes. The "machine of death" is a giant tortoise. Blows of sledgehammers on the head are caused by ammunition. Attack from the left corner of the screen.
The Medieval Dead. A medieval castle with ghosts. Find a suitable site will not be easy. But with the "boss" of problems until it arises, throw a rider on the Troyan horse with cobblestones from the left shoulder.

Mutilation on The Bounty

The top of any mast of a pirate ship is at your service! And try to collect a lot of cores, they will need a shootout with the rival vessel rented. Zaprygivat on the "goldfish" you will soon learn, but whether it will be possible to rest on it - it's as lucky. Ideally, all the heroes flying into the hero you must be able to jump over. It does not work out-try to "enter the phase" by running to the edge of the screen. In vain do not risk - at a time to release in the protruding "pirate" more than two shells will not succeed.

The underwater world contains many dangers - aggressive shells, electric snows, jellyfish. But the mass of suitable sites for attacks. Jumping over the shells of the submarine and unnecessary "squires", throw an asterisk in its dome. You can take a timeout by dolbanuv sledgehammer on the button at the bottom. On the bubble that appears, you will reach the door with the first aid kit.

Wild West. Collecting cacti on the top of the hill can diversify the walk along the prairies to one very fun button with the inscription DANGER. And you will need cacti in abundance, because the firing of the van with the rival in the second part of the level is at least simple (know, jump over the barrel after every two hits), but it's long.

A Site for Sawed Eyes

The building site is replete with ledges for a problem-free pastime. But the boss bulldozer will have to sweat. The fact that bricks fall from the sky - a trifle, it is almost impossible to avoid them in battle conditions and it's better to just stand in a place where they fall less often. The main difficulty is that malicious "squires" often make their raids simultaneously with the discovery of the bulldozer's vulnerability.
In this case, I recommend that you arm yourself with a sledgehammer and interrupt an "off-phase" trifle. Ignoring her, you will put your life in greater danger.

"Pipeline" conveyor is hardly more difficult than the previous level - understand your
pleasure! And to beat the rival, perched on the main assembly of the plant, it became much easier. Learn how to jump over the "shell" from the installation and the "squires" dropping from above with a series of two precise jumps, then boldly run two bolts into the opponent.
Finally, I note that people with unstable psyche mockery of the heroes of this game may not help solve all the problems in their personal lives. The rest I advise you to use it in Easy mode as an antidote to overload caused by hard work, exhausting work, the passage of a super-complex action movie and other righteous deeds. And, of course, in the Hard mode - in order to cause these very overloads!
‹
›
Home
View web version