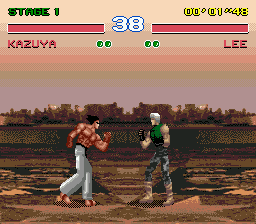 Genre: Action
Perspective: Side view
Visual: 2D scrolling
Gameplay: Fighting, Martial Arts
Art: Anime / Manga
Released: 1997
Platform: SEGA Genesis / Mega Drive
The game is a pirate made by pirates without a license from Sega (Unlicensed). This game is an attempt to make a port of a popular game. Although the game is called Tekken 3 Special, it's actually the backgrounds, and the players were taken from the game Tekken 2. It's clear that they were very heavily modified and redesigned for 2D and Sega Genesis palette. And no 3D here and does not smell. There are only eight characters in the game: Kazuya Mishima, Lee Chaolan, Paul Phoenix, Jun Kazama, Yoshimitsu, Heihachi Mishima, Nina Williams, Marshall Law. The game has quite a few movements and does not support a six-button joystick. But you can fireball, which is not in the original game Tekken. In the menu we see the usual game modes for us. Arcade - so to speak, the game of passing, VS. - Battle against each other, a game for two and options.
‹
›
Home
View web version