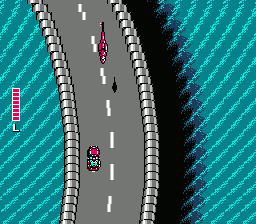 Genre: Action
Perspective: Top-down
Visual: 2D scrolling
Gameplay: Arcade, Shooter
Vehicular: Automobile
Setting: Sci-Fi / Futuristic
Narrative: Spy / Espionage
Published by: Sun Corporation of America
Developed by: Tokai Engineering
Released: 1992
Platform: Nintendo (NES)
2525 year. Over UN countries, there is a threat of an attack from a secret terrorist organization. Their main goal is to destabilize defense systems and defeat allied states. The operation is carried out by an international terrorist, hiding under the pseudonym "X". The CIA receives information in which it is reported that the "X" has completed military training and is ready at any time to launch an attack. The CIA is directing its best agents to thwart the terrorist's plan, but they all fail. Then they send agent Rachel, specially trained for international espionage. Time passes, but there is no news from the agent - the connection is lost. Then the CIA seeks help from an unofficial agent in an attempt to save the world from chaos. His code name is "Super Spy Hunter".

Weapons and additions to the game are obtained by firing and destroying special trucks of red and blue. Red trucks improve the characteristics of weapons, and blue trucks give special bonuses or one-time improvements. Each of these items is indicated by the corresponding letter.
Red trucks give the following improvements:
P - increases the power of the weapon and accordingly increases the damage done to the opponents. The weapon of the car can be modernized 5 times, and the weapon of the aircraft - 6 times.
R - increases the number of shots at a time. The car can be upgraded 3 times, the aircraft - 4 times.
C - makes the weapon homing. When reused, returns the manual control for aiming.
L - increases life by 4 points (except, if the maximum points are reached), and also fills all the points of the strip of life.
Blue trucks give the following improvements:
O - for a short time starts an oil track behind the car, which destroys all enemy vehicles that have fallen on him, including planes.
T - produces for a certain time thorns from the wheels, which allows you to destroy enemy vehicles, and also protects against collisions.
G - allows you to produce an autonomous weapon that destroys all enemies on the screen.
B is a bomb that destroys all enemies on the screen (except bosses).
1UP - an additional life.
L - restores 4 life points.
Oil trail, spikes from the wheels, self-propelled gun and bomb are activated by pressing button B.