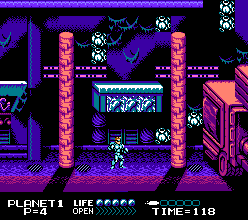 Genre: Action
Perspective: Side view
Gameplay: Platform
Setting: Sci-Fi / Futuristic
Published by: Capcom U.S.A.
Developed by: Capcom Co.
Released: 1990
Platform: Nintendo (NES)
By 2010, technologies have evolved to such an extent that anyone can easily travel from one planet to another using interplanetary gates. In the game "Street Fighter 2010: The Final Fight" (in Japan known as "2010: Street Fighter") we will have to play for Ken, who retired after his fighting career (winning 25 years ago in the "Street Fighter Circuit" "). Later, after becoming a scientist, he invented the substance "Cyboplasm", which not only rejuvenates the body, but also empowers the superhuman strength of the carrier. Further events develop rapidly: in Ken's lab, his assistant Troy is killed and steals with unusual substance are stolen. Ken implants a bio-shell and begins to hunt for criminals.
It turns out that the robber is himself Troy, who skillfully imitated his own death! His idea was to create an army of stuffed Cyboplasm stuff and, guiding them, conquer the whole world. After the victory over the former assistant, Ken has to wander around the planets, stopping the spread of his invention, which now works completely not for the good ...
The goal of the game in each level is to destroy the enemies and collect the energy with which the interplanetary gates are opened. The character is able to climb the walls, climb up the ledges, do a somersault. Of weapons at first there are only energy balls, but it can be improved by collecting various bonuses.
Street Fighter 2010: The Final Fight - a very diverse game, with great graphics, you can play it with great pleasure.
‹
›
Home
View web version