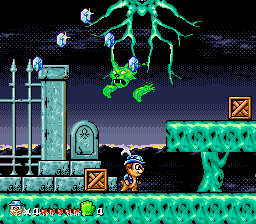 Genre: Action
Perspective: Side view
Visual: 2D scrolling
Gameplay: Platform
Published by: Gamtec
Developed by: Gamtec
Released: 1995
Platform: SEGA Genesis / Mega Drive
Superb pirate game, made by Gamtec company without Sega license (Unlicensed). The game is called Squirrel King, which literally can be translated as King of Squirrel. But we all understand that this is something else, like Chip and Dale are rushing to the rescue for the Sega MegaDrive gaming system. Simply apparently the game was named differently, not Chip 'n Dale Rescue Rangers as from Capcom for the Nintendo Entertainment System (NES), to avoid litigation. The game has almost all the unique graphics and music except for a couple of tunes. Like music in the second act from Donkey Kong. Many consider the quality of the game close to professional. In the game, only 7 acts. Many of them are slightly recognizable, and similar to the rounds from the game Chip & Dale Rescue Rangers. You can choose one of two characters, similar to Chip and Dale, or play together. Just like in the game for NES, you can take and drop boxes. And also throwing fireballs. There are also different Bosses, which can be easily killed. Basically, the game is done very well.
‹
›
Home
View web version