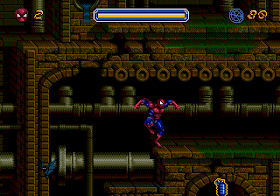 Genre: Action
Perspective: Side view
Visual: 2D scrolling
Published by: Acclaim Entertainment
Developed by: Western Technologies Inc.
Released: 1995
Platform: SEGA Genesis / Mega Drive
Game platformer, narrating about the adventures of the famous comic book hero Marvel Comics Spider-Man. In the game, Spider-Men can do everything that he should be able to do. Climb the walls, shoot cobwebs and, of course, fight well. All this will help Peter Parker in the guise of Spider-Man to pass six not simple levels, at the end of each of them to fight with the boss. But that's not all, taking various bonuses, Spider-Man can change its appearance color. And the most pleasant thing is that it can cause one of the guys of the Fantastic Four to help. The plot line is on the television series and is, as it were, its continuation.
Level select: In the intro where spider-man speaks press A(2), C, then C to access level select.
‹
›
Home
View web version