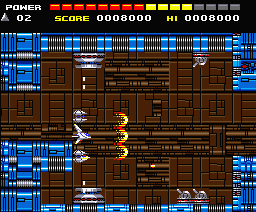 Genre: Action
Perspective: 3rd-person, Side view
Gameplay: Shooter
Setting: Sci-Fi / Futuristic
Published by: Konami Co.
Developed by: Konami Co.
Released: 1990
Platform: MSX
The most high-quality game shooter on the proposed console. Music and graphics are clearly on top. The gameplay is also not bad. It is clearly impossible to relax here, but everything is due to the continuous shooting and the mass of special effects.

In the future on the planet Alpha 4, located on the outskirts of the inhabited part of the galaxy, were found the ruins of an ancient highly developed civilization, covering almost the entire planet. The research team was sent there. Continuing to function the automatic protection system of the planet regarded the actions of researchers as hostile, and in the direction of the Solar system was sent a huge military spacecraft.
The surface of this spacecraft is covered with superdense material, and the ship itself is surrounded by a 100-kilometer barrier, which does not allow to approach it. The ship is armed with an energy weapon capable of destroying whole stars. For its peculiar shape, the ship was called "Manbow".
Kliever Myu, a former pilot of the United Interstellar Force, as well as an archaeologist studying alien civilizations, found that the only way to get inside the protective field of "Fish-Moon" - a portal located in the dungeons of the planet Alpha 4. There was also found a small A space ship with a powerful weapon. On this ship Cleaver goes to the "Manbow".

The game process as a whole is similar to other genre games and other similar games from Konami (Gradius series).
The player's weapon has 16 power levels, which is increased by taking special prizes and decreases over time. Also there is additional weapons in the form of satellites. Opponents can attack not only from the front, but also from other sides, and the player can change the direction of the shooting.
The game consists of eight levels, at the end of each of which there is a boss. In some levels, the movement is from left to right, some are labyrinths with automatic direction reversal.
‹
›
Home
View web version