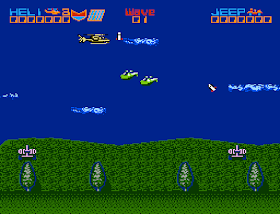 Genre: Action
Perspective: Side view
Gameplay: Arcade, Shooter
Setting: Sci-Fi / Futuristic
Vehicular: Helicopter
Published by: American Sammy Corporation
Developed by: Tecmo
Released: 1990
Platform: Nintendo (NES)
A good scrolling shooter, in which there is the possibility of playing for two pplayers in a cooperative mode. The player will have to control either a helicopter or a jeep, each of which has its combat power and has its advantages and disadvantages. Playing together, you do not have to choose, and the first player takes on the role of the helicopter pilot, and the second - the driver of the jeep and, cooperating together, they are practically invulnerable. In addition, the weapons of each of the companions can be improved by picking up bonus items from defeated enemies. At levels full of enemy technology, which is programmed to destroy any intruder, and at the end of each level to fight with the boss - usually a monstrous and unseen military equipment. In general, a fairly good game for nes, and is especially interesting when playing for two players.