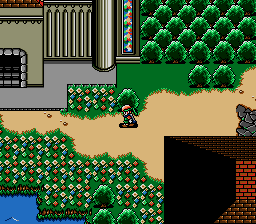 Genre: Role-Playing (RPG), Strategy / Tactics
Perspective: Top-down
Pacing: Turn-based
Setting: Fantasy
Published by: SEGA of Americ
Developed by: Climax Entertainment, Sonic Co.
Released: 1993
Platform: SEGA Genesis / Mega Drive
The game is longer in duration than the first, and here the player is given more freedom of action. The game lacks a system of division into chapters, and the player can return to any part of the world that he visited earlier. For many characters in the game there are two ways to enhance.

Shining Force II - tactical role-playing game. The player takes on the role of the leader of the team Shining Force Bowie. In addition to participating in the battles, the player explores the cities and other terrain, communicates with people, forms a team and distributes the equipment. Unlike the previous game, the player can freely visit the locations where he was previously, but the main part of the game is still made up of battles. In one of the cities there is a headquarters where the player can talk to each ally and see his status. Traveling the world, the player also finds treasures and interacts with key objects.
Each ally is represented as a character with its own history and character. Some of the characters are hidden, and in order for them to join the detachment, it is necessary to carry out certain actions. Each character has a class that determines his ability to use different types of weapons and possession of magical spells. Battling enemies and performing other actions, the characters become stronger, gaining experience points and raising their level. At level 20, a player can raise a character to a higher class. Some characters have the ability to be translated into one of two possible classes, one of which is only available if there is a special subject. There are 30 game characters available.
In battles, space is a square grid, where each character occupies one square. The battles in the game are step-by-step. During the turn, the character can move and perform one action: attack, use magic or an item. Separate commands, such as outfitting or throwing an object, are not considered actions.
A battle is considered won if all enemies are destroyed, or the commander of an enemy unit is destroyed. If Bowie is destroyed or retreated, the battle is considered lost, and the player is in the nearest city, where he can restore the team and again engage in battle.

The game starts on a dark and rainy night. King Granzil and his minister guard the Tower of the Ancients, inside of which was magically sealed a sleeping evil, known as Zeon, King of the Devils. Meanwhile, the thief Slade enters the shrine to the south of the castle and involuntarily destroys the magic seal by stealing two precious stones (Light and Dark) and freeing Zion. There is a strong lightning strike, and the door to the Tower of the Ancients opens, which disturbs the minister and the king.
The king is attacked by the devil Gesp (one of the main antagonists of the game). The next morning, residents of the city learn that the king is sick, and the door to the tower is open. Sir Astral and Bowie, along with the healer Sarah and the centaur Chester, are sent to investigate what happened and go to the tower.
In the tower, they collide with the devils "Gizmo" and enter into a battle with them. After the victory, the leader of the devils flies away to take possession of the king's body. The Astral and Bowie return to the king, but he is already possessed by the devil. The astral casts out the demon, but he again manages to fly away. The minister sends after him a detachment of soldiers.
Soon all the danger of an open door becomes obvious. Bowie and his friends begin their struggle against the Zion armies and go in search of the Holy Sword and the stolen gems to seal the Devil King again.

Connection with other games of the Shining series

The action of the game Shining Force II occurs 40-70 years after the events of Shining Force Gaiden: Final Conflict on the same lands - Parmesia and Grance. The main antagonist is Zeon, the devil, who helped destroy DarkSol in Final Conflict. The game also explains how the feud of Zeon and Darksol began. A follower of Zeon, named Oddai, also plays a leading role and dies at the end of the game.
The population of the present city of Granzil was formed at the end of Final Conflict. Howell still lives in the city he founded, and one of his children, namely Chaz, subsequently joins the player's team. Howell also shares information about the leaders of the devils, which he collected in Final Conflict, and his student Kazin also joins the team. The gods Vulkanon and Mitula also play a special role here. Artifacts from Final Conflict, Caravan and Nazk ship are also present in Shining Force II, and from the monsters Kraken, terrorizing the surrounding lands, reappears.
In the game Shining Wisdom, there is also a connection with Shining Force II. Sarah and Kazin (in the translation of Working Designs - Sala and Parn) became wandering companions, and the Parmetian War is mentioned several times in Shining Wisdom.
‹
›
Home
View web version