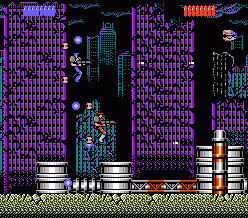 Genre: Action
Perspective: Side view
Gameplay: Shooter
Setting: Sci-Fi / Futuristic
Published by: Natsume
Developed by: Natsume Co.
Released: 1991
Platform: Nintendo (NES)
The action of the game "S.C.A.T .: Special Cybernetic Attack Team" (in Europe known as "Action in New York" and in Japan - "Final mission") takes place in New York in 2029: fish-like space aliens invaded Earth. We have to fulfill the role of soldier of the future, alone opposing the forces of an extraterrestrial aggressor.
The protagonist uses a special device that allows him to fly. Movement on the level occurs automatically, you can move within the screen and shoot left or right and improve your weapons, collecting different bonuses (laser, bombs, pulses, weapons improvements). During the passage, two orbiting satellites flying around us will help us, which can shoot in different directions.
In total there are 5 levels in the game. For every 10,000 points an extra life is given.
The game on the gameplay is very similar to "Forgotten Worlds" from the company "Capcom", where the hero also flew through the levels, but could shoot in different directions and did not have satellites.
In the European and American versions of the game, a map appears between the levels, and two levels are interchanged. The appearance of the characters has changed, now they are of different sexes and a choice has been added between them. The complexity of the game is reduced - the number of lives is doubled, the weapon is not lost when it hits the hero, the bullets of the satellites are made more visible, and the behavior of the satellites is also changed.
A great scroll-shooter "Action in New York" can definitely be recommended for the passage. The game received the highest ratings of many critics, among the final phrases were, for example, here are these: "SCAT is a great game that boasts good graphics, music and gameplay, it is interesting to play even now.
‹
›
Home
View web version