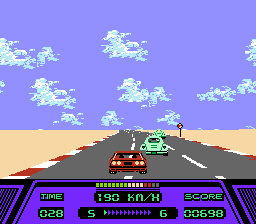 Genre: Action, Racing / Driving
Perspective: Behind view
Gameplay: Arcade, Vehicle Simulator
Vehicular: Automobile, Street Racing
Published by: Nintendo of America Inc.
Developed by: Square Co.
Released: 1987
Platform: Nintendo (NES)
The essence of the game process is to overcome several time sections of the road during the allotted time intervals, reaching the checkpoints along the route in time. Hit the road sign or tree leads to an accident, a collision with another car slightly reduces the speed, but allows you to continue driving. Each accident takes a lot of time, which makes it harder to get to the control point. After the end of time, the car travels a further distance and, if the next section of the road is nearby, is able to reach it.
Before the start, we are free to choose between two cars: the Ferrari 328 or the Formula 1 race car of the "Lotus" team. Both cars behave exactly the same, developing a maximum speed of up to 255 km / h. The game is divided into eight levels, and as usual, each subsequent one is more complicated than the previous one.
"Rad Racer" became one of the few games supporting the innovative peripheral device "Famicom 3D System", displaying what is happening in 3D graphics (the box with the game contained stereo glasses creating the illusion of 3Dity, and at any time this mode could be turned off using the button "Select").
It is noteworthy that "Rad Racer" appears in the adventure comedy drama 1989 "The Sorcerer", where one of the heroes uses the "Power Glove" device to pass the first level, after which he speaks of the incredible coolness of the device.
Since "Rad Racer" was among the first autosimulators for Famicom / NES, critics reacted approvingly to it, and the project itself was accompanied by tangible commercial success. In particular, the magazine "Nintendo Power" put it on the eighth place in its list of thirty best games from "Nintendo". Among the negative qualities was the copying of the ideas released by the game "Out Run" a year earlier, although the "GameSpot" site in its article "The history of the company" Square ", even despite the fact of borrowing, spoke about the game very positively, calling it:" more than just Clone "and praised for a realistic sense of speed.
‹
›
Home
View web version