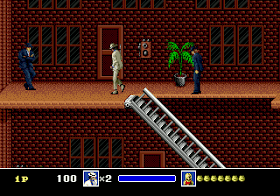 Genre: Action
Perspective: Side view
Visual: 2D scrolling
Gameplay: Platform
Published by: SEGA of America
Developed by: SEGA Enterprises Ltd.
Released: 1990
Platforms: SEGA Genesis / Mega Drive, SEGA Master System
Yes, he is the great king of pop Michael Jackson. In each level you need to save a certain number of children hidden in different corners, and in the end you have to fight with the boss. To lower the iron ladder in the first level, press the blow + up. In the second level, for access to the sewerage, go to the hatch and press the A button. At the third level, do not forget to check the bushes. At the fourth level, you can enter the cave behind the waterfall; Places marked with signs can be pierced (kick + up). In the fifth level on the floor you can find teleports; Computers and guns can be destroyed. The sixth level - a battle with the boss in the strange space flight mode. An interesting game, which is very lack of a password system.

In order to select the desired level, on the title screen, on the second gamepad, hold the buttons up, left, A and press start on the first controller. Choose a single game. "Round 1" appears on the screen. Now you can select any stage with the help of the buttons to the right and left, except the 6th.
‹
›
Home
View web version