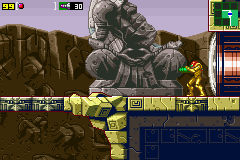 Genre: Action
Perspective: Side view
Visual: 2D scrolling
Gameplay: Metroidvania, Platform
Setting: Sci-Fi / Futuristic
Published by: Nintendo of America Inc.
Developed by: Nintendo R&D1
Released: 2004
Platform: Game Boy Advance (GBA)
Since the game is a re-release of Metroid, many players will see that the game mechanics of Zero Mission is very similar to the one in the original. However, there are a lot of new things, new places, mini-bosses, and also a completely new place near the end of the game. At first glance, the passage of the game is similar to linear: you have to collect some items in a certain order. But, careful investigation of the situation allows the player to ignore most of this order. This technique is called "Destruction of the sequence", and it makes it possible to finish the game, collecting only 9% of things. The progress of the game can be saved only in certain rooms, respectively called "Storage rooms", and indicated on the map available in the game with the letter S.

Many improvements and things from the original Metroid appear in "Zero Mission", with the same application, and with the same effects. The main things are: Varia Suit, Gravity Suit, Morph Ball, Morph Ball Bombs, Missiles, as well as a variety of beams. Hi-Jump Boots and Spring Ball are connected in one thing, which was first done in Metroid Fusion. Wave Beam and Spazer Beam are also combined. The only new thing in the game is the Power Grip, which allows Samus to grab the corners and pull up on one hand. In Metroid Fusion this technique was present from the very beginning. The game can use the technique of jumping from the wall, it can be used with a single wall. Technique Shinespark, first appeared in Super Metroid, is also present.

The uniqueness of Zero Mission, Metroid Prime and Metroid Prime 2: Echoes is the discovery of new features, such as the emulation of the original Metroid for the NES prefix, as well as the audio test. This is achieved by playing the game on different difficulty levels. Using the Gameboy Advance connection cable, the game can be connected to the Metroid Fusion game, then the Fusion end-pictures are available for viewing (including Japanese endings from different difficulty levels). Also, there is a gallery in which you can view all open endings. The Temporary Attack mode appears in the save slot in which the game was passed. In the Temporary Attack Mode, the player passes the game at normal difficulty level, and at the end of the game receives a password, depending on the time spent on the game. The password was used to enter the competition held by Nintendo in Japan.

Contradictions with the Metroid

Metroid: Zero Mission contains many definite mismatches with the Metroid storyline. The first and most notable are the differences in the appearance of locations (taken from Super Metroid). Locations include Brinstar, where the player starts the game, rescue shaft, Mother Brain room in Tourian, and various places in Crateria.
In this game, Kraid is almost as big as in Super Metroid. In addition, there is no bait "fake Kraid", which is a departure from the short tradition.
Mission Zero establishes as a fact that Chozo once lived on Zebes, and that Samus was raised here when she was a child. These details have never been mentioned in a series of games, but have been opened in various other materials, such as the manual for Metroid Prime and the comics of Nintendo Power.
Due to the location of the main pirate ship on Zebes, the fans thought that it could be a broken ship that was in Super Metroid. However, the director of "Mission Zero" Yoshio Sakamoto rejected such an opportunity, saying that they are different ships.
Also, the game guide pushed the formation of the Galactic Federation five years ago.
‹
›
Home
View web version